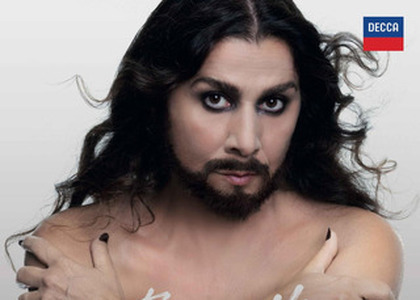 A masterpiece: this is the only description I can offer to any album bearing the name of mezzo-soprano Cecilia Bartoli. On November 28th of 2019, Decca record label released internationally the album Farinelli - Cecilia Bartoli already has a tradition of releasing a new disc every end of the year.

As it is tradition for her to offer us unusual album covers: this time, Cecilia Bartoli appears with bare shoulders, but with a mustache and a beard - to remind us of Farinelli, a man with a woman's voice, the most known castrato singer of the 18th century. It is a wonderful album - as Cecilia Bartoli has gotten us accustomed. I fell in love with the last aria from this album - Alto Giovefrom Nicola Porpora's opera Polifemo.It is the only aria on the album that Cecilia Bartoli recordedwith the ensemble Les Musiciens du Prince Monaco, conductor Gianluca Capuano. And the only one on this album recorded in 2019. Les Musiciens du Prince Monaco was established in 2016, at the initiative of Cecilia Bartoli, at the Monte Carlo Opera; from 2020, Cecilia Bartoli will be the director of the Opera in Monte Carlo, as it was recently announced.

A world that is far from our world today, one that we can only imagine, in the absence of recordings: the world of the castrato singers.Women were not allowed to sing in church choirs or on opera stages, so especially between the 16thand the 18thcenturies, the castrato singersdominated lyrical theaters in particular, the most famous of them enjoyeda status equivalent to the one pop-rock stars have today.The castratosingers had uncommon vocal skills - it is said that they could play up to 250 notes in one breath, and the ambitus was unusually developed, especially in the acute. The most famous of them remains the Italian Carlo Broschi, known as Farinelli, who lived between 1705 and 1782. Of course, we cannot even imagine how Farinelli's voice sounded; the singer was also unusual because he came from the aristocracy. Children from poor families were usually castrated, hoping that one day, the whole family would benefit from the success of the castrato singer. But Farinelli's contemporaries compared him to God himself.

Farinelli was the creation of a Neapolitan composer, Nicola Porpora, who wrote numerous operas and arias specially tailored for the vocal skills of the castrato singer. On the album, there are five other arias by Nicola Porpora - from the operas Polifemo, La festa d'Imeneo, Marc Antonio e Cleopatra and Semiramide, Regina dell'Assiria. Certainly, Cecilia Bartoli is not and cannot be Farinelli. But her way of sustaining the breath, her precision of the intonation and the emotion she can produce has probably the same effect on us that Farinelli had on his contemporaries. This is not the first time Cecilia Bartoli takes on the repertoire of the old days, with a predilection for the castrato singers. In 2009, she released the album Sacrificium, where music lovers found arias recorded for the first time ever that had beenwritten by composers that today are virtually unknown.

In fact, Cecilia Bartoli confessed to being an Indiana Jones of the repertoires, always searchingfor something newamongst the scores nowforgotten. Of course, the arias of Nicola Porpora, Riccardo Broschi, Geminiano Giacomelli or Antonio Caldara, composers who mainly wrote arias for the voices of the castrato, are not necessarily masterpieces per se. But what adds value to Cecilia Bartoli's record is the voice of this extraordinary singer, versatile, rich, with an unbeatable technique, intelligently driven and with a very expressive interpretation. If we also add the fact that Cecilia

Bartoli turned 53 in 2019, we could say that, indeed, we are witnessing a miracle: such quality defies nature.

A word of praise also goes out to Il Giardino ensemble harmonico and conductor Giovanni Antonini who accompanythe extraordinary and always surprising Cecilia Bartoliefficiently, with great style and sensitivity.

The album Farinelli can be heard by the Romanian public for the first time on Radio Romania Muzical on Monday, December 9th, starting from 7 pm.