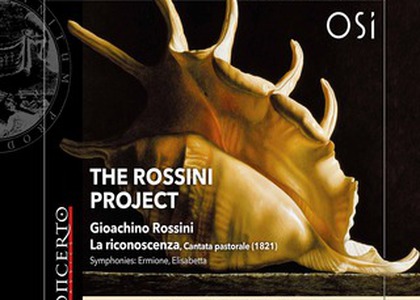 For the first time, an album to be released by the Italian Swiss Orchestra house on February 7th - volume no. 2 of the Rossini project, proposed by the Italian Swiss Orchestra, led by Markus Poschner, the German who from 2015 is the main conductor of this ensemble who also visited us in Bucharest, at the previous edition of the RADIRO festival, in 2018.

The Italian Swiss Orchestra has set itself an ambitious project: the discovery and recording, even in the world premiere, of little known works by Gioachino Rossini, a composer of whom we could assume that everything is already known.

However, in March 2019, The Italian Swiss Orchestra released a first record from the Rossini project, containing some of the unique works of youth of the Italian composer.

This second album from the Rossini project is titled "From Naples to Europe", with works composed between 1815 and 1822. The year 1815 was very important for the young Rossini, 23 years old at the time; it is the year when he moved to Naples to become the musical director of the royal theaters in the city, including the important Teatro di San Carlo.

The first opera Rossini wrote for the San Carlo Theater, in 1815, was Elisabetta, regina d'Inghilterra, in which he uses moments from his earlier works, yet to be played in Naples. Moreover, the overture is recycled as the overture of a work he will write a few months later for the Rome Theater and which will be one of his great successes: The Barber of Seville.

If the Barber of Seville, composed in 1816, was one of Rossini's great successes, the same cannot be said about his work in the Ermione series, composed in 1819. Moreover, the failure of this work has determined Rossini to progressively reduce the intensity of collaboration with the theaters in Naples, starting from 1820: 5 years had been sufficient.

Ermione, with a libretto after Jean Racine's Andromaca, has a rather unusual overture: the Trojan choir intervenes several times during the orchestral speech.

This record has three works recorded during the world premiere included as a surprise element: the pastoral cantata La riconoscenza, a cavatina from the cantata Il vero omaggio and a short chorus from a cantata composed in 1823.

The period from 1820 to 1824 was a journey full of travel for Rossini, who had significantly reduced his obligations to the theaters in Naples, where he was musical director. In 1821, he wrote nothing new for Naples. However, he decides, to compose a pastoral singing for the Duchess of Bourbon, during a visit to Naples, rather as a diplomatic gesture towards the Neapolitan authorities. The La Riconoscenza cantata from 1821 is designed for 4 solo voices, choir and orchestra; it includes 7 acts, among which the tenor area is noticeable. This song is special, because Rossini recycles nothing from his previous works during its creation.

Along with The Italian Swiss Orchestra, led by Markus Poschner, 4 solo voices: tenor Edgardo Rocha, soprano Michela Antenucci, mezzo-soprano Laura Polverelli and bass Mico Palazzi. If the evolution of the orchestra is within the known parameters - the Italian Swiss Orchestra is considered one of the best chamber orchestras in the world, I would not have the same words of appreciation for the solo voices. The natural quality of the voices is not of the highest level either; sometimes an excessive vibrato intervenes, nor is the pearl specific to the belcanto always performed at the expected level, other times there are strikes in the acute register. Too bad, because the score is interesting and offering!