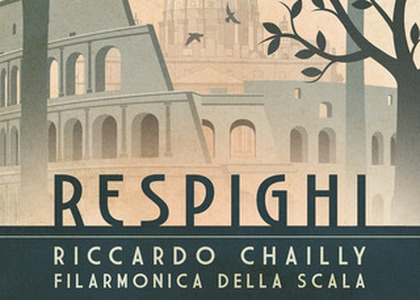 An album launched by the Decca British house on the 11th of September, recorded by the La Scala Philharmonic Orchestra, conductor Riccardo Chailly. The famous orchestral ensemble of the Scala theatre from Milano, led by its musical director, the redoubtable conductor Riccardo Chailly, proposes orchestral works by Ottorino Respighi -some of them famous, others known very little, from the early creations of the Italian creator.

There couldn't miss the symphonic poems which made Ottorino Respighi popular and brought him global recognition: Pines of Rome and Fountains of Rome.

Ottorino Respighi was a contemporary of George Enescu-he was born in 1879 and passed away in 1936. In 1901 Enescucomposed his famous Romanian Rhapsodies; Respighi claimed his fame with the symphonic poem Fountains of Rome, composed in 1916. When Enescu was working on his Rhapsodies, Respighi was composing a series of works very little known today - Aria per archi in 1901, Leggenda for Violin and Orchestra in 1902, Di sera, an adagio for two oboes and strings in 1903. These are youth works, with a romantic language, evocative, with a nostalgic nuance. A discovery- on the new album of the Scala Theatre Orchestra from Milano, recorded under the leadership of the conductor Riccardo Chailly.

We, at Radio Romania Muzical, had the chance to listen other records from the series proposed by Riccardo Chailly and the La Scala Philharmonic Orchestra at the Decca house, within a series of which purpose is to shed light on Italian composers. On the 7th of February 2020 there was launched a record with works of Luigi Cherubini, on the 7th of June 2019 the one with works ofNino Rota, in November 2018 - Messa per Rossini, in Januariy 2017, overtures, preludes andintermeziifrom Italian works, in 2015, cantate by Rossini. In 2015, Chaillywas taking over the main conductor post of the Scala theatre from Milano, and in January 2017, the one of musical director, and this project of recordings is a part of his plan to bring relevance to the Milanese orchestra on an international level.

Sensible, very expressive, with an ample palette of dynamic nuances, the orchestra is redoubtable under the stick of Riccardo Chailly. For example, in the Ancient Airs and Dances Suite No. 3, signed by Ottorino Respighi.

A repertory full of surprises chosen byChaillyfor a record that sheds light on one of the illustrious composers from the beginning of the 20th century, Ottorino Respighi, ambassador of impressionism in Italy. In the interpretation of the Scala Theatre Orchestra from Milano, Respighi hascolour, perfume-a vivid and very evocative music, as we discover in their interpretation for the famous symphonic poem Fountains of Rome.