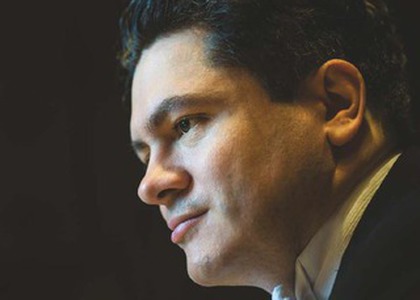 It is a joy to remember, with the release of a new album at the Casa Radio publishing house, some unforgettable events that brought the maestro CristianMăcelaru to the desk of the National Radio Orchestra. This year 2020 is saved in terms of musical life, and through record appearances that aim to cover the huge gap left by the closed doors of concert halls.

Two live episodes are included in this new album - Fantasia "Furtuna" op.18 by PiotrIlici Tchaikovsky from a concert of 2014 and Symphony VII by Antonin Dvorak, recorded a year later, in the same hall "Mihail Jora "of the Romanian Broadcasting. Both recordings radiate a sound process of the highest quality. The response and the unconditional and full involvement of the members of the National Radio Orchestra in front of an international conductor, famous for his performances, are clearly perceived. I just remember that earlier this year CristianMăcelaru won his first Grammy Award for an album recorded with the Cologne Radio Symphony Orchestra, with Nicola Benedetti as soloist, and his contract was extended until 2025 at the desk of this German ensemble. . In parallel, on September 1, he took over the chair of music director of the National Orchestra of France, along with other projects made overseas and around the world.

I do not wish to prolong this chapter too long. We remain in a Romanian ambiance, impressed by the conductor's desire to energize and get involved in everything related to the evolution for the better of our concert life. This is also demonstrated in the present album, in which we admire the compact and beautifully embossed sonority of the National Radio Orchestra, the way in which the programmatic scenario of Fantasy "The Storm" by Piotr Ilyich Tchaikovsky dramatic that evokes so suggestively, from the first measures the sea through the string compartment, then the profile of Prospero who directs with the help of Ariel, the storm - through such plastic effects rendered by members of the National Radio Orchestra with pathos, virtuosity, but also with a deep sensitivity in the lyrical passages, leaving us the happy sensation of a single instrument with dozens of ramifications that builds the sound plans with that kind of professionalism and ardor, alone able to arouse the emotion and admiration of the listener.

What does the conductor Cristian Măcelaru declare in the interview he gave to our colleague Andreea Kiseleff, related to this opposite? why, maybe because it's a more obscure work, people don't understand it. I think it's very interesting, it produces very strong emotional waves and that's why I've always wanted to direct it. It's a work that I propose very often. in my repertoire. In the case of Tchaikovsky's Storm, there is not a very long interpretive tradition that I had to fight against, because it was not performed by many conductors. "

From a concert of 2015 was included in this new album and the Seventh Symphony in D minor by Antonin Dvorak, dramatic but also retaining a bright quality that obviously shines in the singable lines, very refined highlighted in this version. In the interview conducted by our colleague Andreea Kiseleff, Cristian Măcelaru highlights a very important aspect - that of constantly looking for the true voice of the composer, beyond everything that has been added over time and consolidated in an interpretive tradition.

"I always found Dvorak's music more interesting when what he writes stands out. To me, Dvorak's Symphonies are closer to Janacek's music than to Brahms' music - because it's an understanding of music that Dvorak suffered a lot during his life, he lost family members, but his music has always been full of optimism and with a joy of life that is different in Brahms, it is melancholy. Dvorak's joy is true - a huge difference, especially in the Seventh Symphony, one of the most dramatic, a work that I love so much because it is very deep.It is the Symphony written with so much inspiration, as a In the other Symphonies the compositional, theoretical work is observed, in the Seventh Symphony there is an equal combination of an idea, of a direct inspiration.

This world that music can bring into our lives is a world that puts us in a spiritual realm. The moment we re-enter reality we are transformed. And this has to do with the beauty that a record can bring to a person's life. Because the relationship you have with a record is different from that of a live concert. Everyone thinks he has favorite records that he goes back to like a friend you still want to meet. And every time you meet him, you discover something beautiful. "

I think we will agree to say that this recording also establishes a model that we always want to achieve, as sound, in the way of inner support of phrasing, homogeneity, cantability, sound plans, availability and continuous wonder at the miracle musically, also as a superior understanding of the phenomenon and last but not least friendship, beautifully formulated and encouraged by the conductor in the same interview. It remains an unforgettable event for all of us, this new album "Tchaikovsky - Dvorak" of the National Radio Orchestra, conducted by Cristian Măcelaru, included in the project Discs of 2020 on Radio Romania Musical.