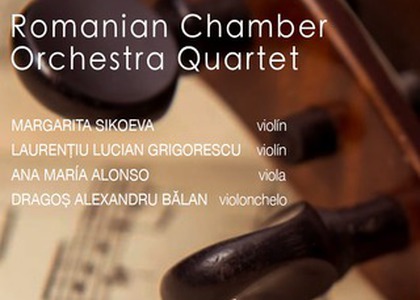 A special concert performed by the Romanian Chamber Orchestra Quartet will take place on Friday, April 9th, at 12 p.m, in the Salon de actós of The San Fernando Royal Academy of Fine Arts, in the presence of officials of the host country, members of the diplomatic corps accredited in the Spanish capital. of the members of the Romanian community and of the audience that loves classical music. The concert will be recorded and broadcast on the YouTube channel and Facebook page of ICR Madrid, from 7 p.m, Spanish time (8 p.m, Romanian time). The event takes place in the context of the 140th anniversary of the establishment of diplomatic relations between Romania and Spain and is organized by the Romanian Cultural Institute from Madrid , in collaboration with the Embassy of Romania in the Kingdom of Spain, with the support of the San Fernando Royal Academy of Fine Arts in Madrid.

The concert is a tribute to Romanian and Spanish music and to all those who contributed to the foundation of Romanian-Spanish relations in the 140 years of bilateral diplomatic relations between the two countries at the extremities of the European continent, but united since antiquity by their Latin origin.

Romanian Chamber Orchestra Quartet, composed of four members of the Symphony Orchestra of the Royal Theater of Madrid, Margarita Sikoeva (violin), Laurențiu Lucian Grigorescu (violin), Ana María Alonso (viola) and Dragoș Alexandru Bălan (cello), will perform suites from the Romanian repertoire, as well as works by Spanish composers Juan Crisóstomo de Arriaga and Joaquín Turina. Two of the musicians, cellist Dragoș Alexandru Bălan and violinist Laurențiu Lucian Grigorescu, are part of the Romanian Chamber Orchestra (RCO), which represents, through the value of its members and the contribution to the national heritage, a landmark for Romanian culture.

In the vision of the renowned violinist Alexandru Tomescu and the violist Cristian Andriș, the artistic directors of the Romanian Chamber Orchestra, the project consists in creating a string orchestra composed of 22 musicians. One of the aims of the ensemble is to promote classical music, written for this orchestral formula, performed at an excellent level comparable to the best chamber orchestras in the world.

"My colleagues and I are delighted to be part of this beautiful event that marks 140 years of diplomatic relations between Romania - our motherland - and Spain - the adoptive homeland. We believe that the chosen repertoire will include both the folklore of the two countries, as well as classical music and we hope you enjoy with us! Happy anniversary, Spain! Happy anniversary, Romania! ", said Dragoș Alexandru Bălan for ICR Madrid.

"Participating in this special event, which celebrates a glorious bilateral collaboration with a remarkable history, brings us great honor. We are convinced that the extraordinary musicians of the Romanian Chamber Orchestra will complete, with a perfect harmony of sounds, this grand meeting. For more fantastic years together!", said Ovidiu Andriș, manager of the Romanian Chamber Orchestra.

The concert "Spanish-romanian resonances" takes place within the program "Romania in music", initiated by the Romanian Cultural Institute from Madrid, in 2020, in partnership with The San Fernando Royal Academy of Fine Arts, one of the most representative Spanish cultural institutions.

Admission is free, access to the concert hall is allowed within the available seats. Wearing a protective mask is mandatory.