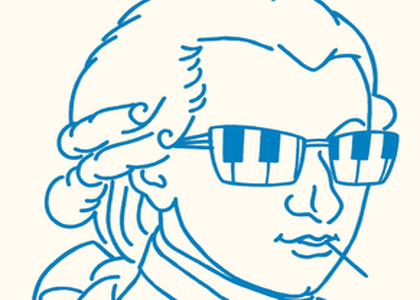 Famous musical works for contemporary tastes. True to its mission to present innovative proposals in all artistic fields, the Austrian Cultural Forum Bucharest brings to the Romanian public young musicians from Austria and Romania who put in a courageous interpretive light pieces from the classical musical repertoire, jazz or on the border between genres . This new series of online concerts within the "Austrian Musical Spring" program is offered by the Austrian Cultural Forum Bucharest, exclusively and free of charge for Romania, thanks to the collaboration with two prestigious partners - "MuTh - Konzertsaal der Wiener Sängerknaben" (virtual concert hall of the famous Boys' Choir from Vienna, Austria) and the Musica Ricercata Association (Romania).

MuTh (a play on words that refers both to "Musik & Theater", but also to the idea of "courage" - "Mut", in German) is one of the most modern concert and performance halls in Vienna, standing out in last year, and through an acclaimed series of various concerts, streaming for the online audience. The main stage of the Vienna Boys' Choir, MuTh "represents a bold combination of music and theater, classical and avant-garde spirit, openness and diversity". (https://muth.at )

The Musica Ricercata Association is an international artistic collective that dedicates its activity to innovative stylistic approaches, based on scientific research, in the interpretation of the classical music repertoire. Created by the famous conductor Gabriel Bebeșelea, the ensemble and the Musica Ricercata association "bring together famous musicians from all over Europe and promote various and exciting musical programs, starting from the baroque to the contemporary period, with a special emphasis on old music". (https://www.musica-ricercata.com/ )

The program of the second part of the Austrian Musical Spring:

Young musicians perform works by Mozart at the ages when they were composed! An original project that intends to give a new freshness to the repertoire composed by the young genius from Salzburg, the concert "Mozart in my Hands" presents some of the best Austrian instrumentalists and vocal soloists of the new generations of artists. The event is organized by the "MuTh - Konzertsaal der Wiener Sängerknaben" in cooperation with the Jungen Philharmonie Wien (Vienna Youth Philharmonic Orchestra) and is presented by the Austrian Cultural Forum Bucharest on its website until April 29th. Partner- Radio România Muzical.

Under the baton of conductor Michael Lessky, you will be able to listen to some works of virtuosity, both for piano and vocals, by Wolfgang Amadeus Mozart, renewed by the temperament of young soloists. In the program - Piano Concerto no. 8 in C major K. 246; "Ch'io mi scordi di te" - Scene and Rondo KV 505; "Nehmt meinen Dank, ihr holden Gönner!" concert area KV 383; Piano Concerto no. 27 in B flat major KV 595.

The concert can be seen here - http://bit.ly/MozartInMyHands

Jazz merges with electronic music, hip hop and R&B. Known to the Romanian public due to his successful concerts in several cities of the country, jazz saxophonist Ulrich Drechsler meets Gazelle & The Bear, a duo of composers and performers who are experiencing a rapid rise on the Austrian music scene. The concert offers musical pieces inspired exclusively by the idea of ​​"Touch!", But also by the various sounds that contacts between people or people and things can cause. The event is organized by "MuTh - Konzertsaal der Wiener Sängerknaben", within its series of "Promenade Concerts", and is presented by the Austrian Cultural Forum Bucharest on its website, between April 26th and May 10th, 2021. Partner - Radio România Muzical.

The "Touch / Touch!" Concert is part of the "Book of Sounds" project, imagined by the multi-award winning composer, performer and producer Ulrich Drechsler. He invites musicians of the caliber of the moment, from the fields of indie rock, pop and electronic music, to create sound universes inspired by certain words or sounds, in concerts in which improvisation is the place of honor.

The concert can be seen here - http://bit.ly/ConcertTouchAttention

Venice-Vienna, via Romania! A brave concept in a sparkling concert, "JAZZT Vivaldi", with high-class musicians - soprano Rodica Vica (Romania-Austria) and ImpRoWien Ensemble (Austria-Romania). This project is organized by Musica Ricercata, in collaboration with the Austrian Cultural Forum, which will broadcast the concert live, on May 4th, at 19.00, on its Facebook page - https://www.facebook.com/fca . Bucharest. "JAZZT Vivaldi" is co-financed by the Administration of the National Cultural Fund, having as partners - the Romanian Cultural Institute in Vienna, the Association for Music, Art and Culture, Radio Romania Muzical.

The "JAZZT Vivaldi" concert is a musical encounter over time, mainly between Antonio Vivaldi (280 years since his death), George Enescu and Béla Bartók (140 years since the birth of both composers, on the current territory of Romania) - in -an unexpected improvisation exercise, with famous works from the classical repertoire. The program includes musical pieces by Antonio Vivaldi, George Enescu, Béla Bartók, Camille Saint-Saëns, Tomaso Albinoni, Giuseppe Verdi, Gustav Mahler, Astor Piazzolla and Igor Stravinsky.

Details about the project - http://bit.ly/JazzTVivaldi