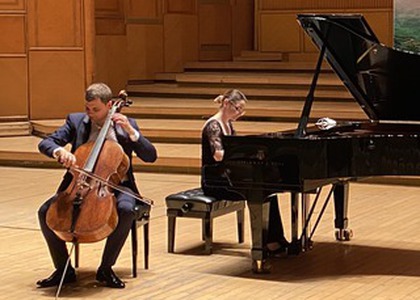 Cellist Andrei Ioniță and pianist Daria Tudor took to the stage of the Radio Hall together on Sunday June 13th. The recital was organized by Radio Romania Muzical and the Rotary Club Pipera, and the theme of the evening was "Freedom".

It cannot be a coincidence that cellist Andrei Ioniță and pianist Daria Tudor have chosen to compose a recital on the theme of "Freedom" exactly 31 years after the events that took place in University Square on June 13th, 1990. However, it should be noted from the outset that the message of the two musicians was not political, but rather philosophical. It was not "freedom" in the sense invoked 31 years ago, but "freedom" as an ideal, in the Enlightenment sense - closer to the principles of John Locke's liberalism than to the need to overthrow a totalitarian system. Beyond our country's recent history and the theories of the English philosopher, on Sunday June 13th we had the opportunity to enjoy good music performed by rising young musicians.

Andrei Ionita is one of the most appreciated musicians of the young generation - he was the only Romanian winner of the prestigious Tchaikovsky Competition in Moscow in 2015. Among his recent achievements, we should mention his first concert with the public, which he performed this year at the Philharmonic in Brasov, in the double role of soloist - both cellist and pianist.

His stage partner, Daria Tudor, is a prize-winning pianist of several international competitions, currently a master student at the Berlin University of the Arts. I first heard Daria Tudor two years ago, with four of her classmates, performing Alfred Schnittke's Piano Quintet, a technically and interpretively challenging 20th century work; at the KamerArt Experience Festival, and now, during Sunday's recital, it was clear to me that this is a pianist with a bright future. The collaboration between the two musicians is not new to anyone, they were part of the Sternin Trio, together with violinist GeorgetaIordache, and over the years they have been stage partners several times.

Such a duo, full of dynamism and energy is not rare, especially for performers of their age; the attribute that sets this duo apart from others is the experience the two have together on stage. Few can boast more than ten years of experience on stage with someone, especially before either of them has turned 30.

Interpretatively, the two musicians lived up to their chosen programme. Cântecvechi by Paul Constantinescu was the first work on the evening's programme, a piece in which the two proved both their ability to understand 20th century Romanian music and their passion for it. Dmitri Shostakovich's works are very popular among the younger generation, attracting performers and listeners alike; among other things, proof of this is the fact that we listened to Dmitri Shostakovich's Sonata op. 40 for cello and piano, in a version full of enthusiasm and energy, the artists managing to capture the fundamental characteristics of the piece, both in moments of emotion and melancholy, as well as in the short playful episodes.In memoriam by Dan Popescu was the third work of the evening, which the audience received with warmth and sympathy. Ludwig van Beethoven's Third Sonata for cello and piano ended the evening's programme in a register worthy of the evening's theme. No wonder, then, that the audience appreciated the performance of the two:

"Exceptional! I've known Andrei Ionita since he was 2 years old. I know all his work. He is a very special and dedicated boy, with an innate talent and an extraordinary work."

"It was delightful! I'm just a simple listener, but it was a very pleasant surprise. I didn't expect Andrei to come to the country, but he did. I've listened to him on the internet more so far. I am full of gratitude to these young musicians!"

"Wonderful! For me, what was impressive was the collaboration between the two of them tonight."

These were the opinions of the audience about the recital on Sunday, June 13th, which ended with an encore offered by cellist Andrei Ioniță and pianist Daria Tudor in an unusual way: both musicians were at the piano, playing three waltzes for four hands by Johannes Brahms. With such an ending to the recital it is obvious that the audience is looking forward to a reunion with the two young artists.their amazing timing, and then the encore, which was the crowning glory of this beautiful evening."