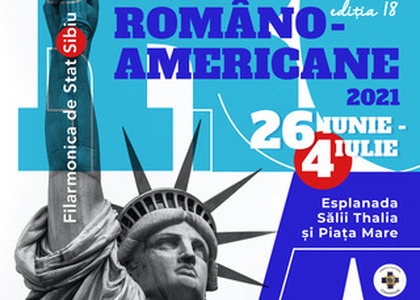 The Sibiu State Philharmonic organizes the first cultural event with the public outdoors this year in Sibiu. The event "Summer Concerts. Romanian-American Music Days", now in its 18th edition, will take place in several venues in Sibiu, between June 26th and July 4th, 2021. Public access is free, within the available seats and only after prove immunity against SARSCov2.

For 9 days, between June 26th and July 4th, over 200 artists from Romania and the United States will perform on the festival stage in 12 events.

The festival program will be opened on Saturday, June 26th, 2021, by a series of small musical recitals held by the "Brass Ensemble of the Sibiu State Philharmonic" in the most unusual spaces: from pedestrian crossings on Coposu Boulevard, to the balcony of the Emperor Hotel Romanilor, the Dome of Subarini Park or the terrace of the Promenada mall. The same musical ensemble can be watched on Wednesday, June 30, on the Esplanade of Thalia Hall, starting at 9 p.m.

On Thursday, July 1st, we move to the Great Square, to musically beautify this emblematic space of the city. The hosts will be the musicians from the "Nicolae Bălcescu" Land Forces Academy Marching Band, who will give a military music concert, starting at 12.00. The project "A story harp" returns to the festival and can be watched on Thursday, July 1st, but from 6 pm, on the stage on the Esplanade of Thalia Hall. Towards evening we return to the Great Square for the official opening of the festival, at 9 pm with the Sibiu Philharmonic Orchestra conducted by the conductor Cristian Lupeș. The guests for this moment will be the dancers of the Sibiu Ballet Theater.

The only musical moment in the program of the festival that does not take place outdoors is the chamber concert "Orgile României" scheduled for Friday, July 2nd at 6 pm, in the Evangelical Church of St. John in Astra Park. In the same evening, in Piața Mare we have a musical meeting with the pianist Ștefan Lovin, the one who prepared a set of Romanian and American works adapted for piano.

Saturday, July 3rd is reserved exclusively for jazz. On the Esplanade of the Thalia Hall, at 6 pm we will watch Mircea Tiberian (piano), Chris Dahlgren (double bass) and John Betsch (percussion).

From 9 pm, Piața Mare hosts the biggest musical event of this year in Sibiu, the ExtraordinaryJazz Concert at Lincoln Center with WYNTON MARSALIS!

We will close this year's edition, on Sunday, July 4, on the National Day of the United States of America, together with Free Groove - the Air Force Blower of the US Army stationed in Europe from 7 pm, followed by lovers from 9 pm pop-rock musicians to participate in a unique concert held by the band Byron with the Sibiu Philharmonic Orchestra

Access in the seating area to all events in the program is free, within the available places and only after proof of immunization against SARSCov2 (they are vaccinated against SARS-CoV-2 virus for which 10 days have passed since the completion of the complete vaccination schedule , persons who show a negative result of an RT-PCR test not older than 72 hours or a certified negative result of a rapid antigen test not older than 24 hours). In order to comply with the sanitary norms in force, the spectators present will have their temperature measured, and each of them will have to disinfect their hands at the entrance. Minors will be exempted from presenting this medical evidence. Wearing a sanitary mask is mandatory for the entire duration of the event. Minors over 5 years old will be required to wear a mask.

Event realized with the support of Sibiu County Council.

Action co-financed by the City Hall of Sibiu

Support the music of the Sibiu Philharmonic! Become a patron through honorary donations to your account: