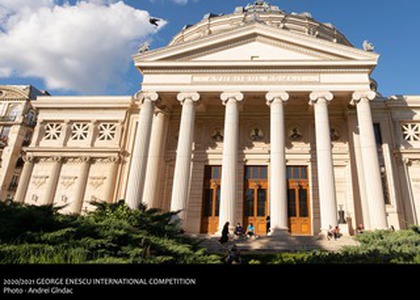 The registrations for the 2022 George Enescu International Competition have started

As a result of the successful experience of the hybrid edition of 2020/2021, the organizers changed the structure of the George Enescu International Competition. Thus, the 18th edition will have a single online stage, in May 2022, and the Semifinals and Finals will take place at the Romanian Athenaeum, between the 3rd and 18th of September, 2022.

Young musicians can register on the website www.festivalenescu.ro (Registration) for one of the four sections (violin, cello, piano and composition). The deadline for registration is April 15th, 2022.

The registration is done by filling in a form, and the judging for the first stage of the Contest will take place online by analyzing the video recording sent by the competitors. It will take place between the 1st and 20th of May, 2022. For the first time in the history of the Contest, the competitors registered for violin, cello and piano who will pass the online stage will reach the Semifinal directly.

All video recordings will be available for free on www.festivalenescu.ro and can be watched by melomaniacs.

The 2022 edition of the Enescu Contest enjoys outstanding musicians in the specialized juries of the four sections. They are formed by renowned professors to whom are added for the first time four specialists from the famous Juilliard University in the United States of America.

The novelties of the 18th edition

The 18th edition of the Contest will open at the Romanian Athenaeum on September 3, 2022 with the Gala Concert given by the George Enescu Philharmonic, under the baton of maestro Peter Ruzicka, with an international premiere: An Ax For The Frozen Sea by Karlo Margetic, award-winning work in the composition section in the previous edition of the Enescu Contest. The program also includes Ludwig van Beethoven's Triple Concerto for Violin, Cello and Piano performed by the winners of previous editions.

The program of this edition includes 19 recitals and concerts, representing both stages of the Contest and extraordinary recitals given by outstanding musicians, members of the juries. Also, the three winners of the previous edition will return to the Athenaeum stage as soloists.

The finals of the Contest will be conducted by 3 prominent musicians of the international stage. Wilson Hermanto, Principal Guest Conductor of the Orchestra Cameristi della Scala, returns to the Enescu Competition for the final of the violin section. Tito Muñoz, Musical Director of the Phoenix Symphony and Case Scaglione, Musical Director of the National Orchestra of Ile de France will participate for the first time in the Enescu Competition for the finals of the cello and piano sections, respectively.

The total value of the prizes is 120.00 EURO, being also included the international promotion and the artistic launch of the most talented competitors. Winning first place at the Enescu 2022 Contest is the ticket to the stage of the George Enescu International Festival, at the 2023 edition - the most talented contestants will have the opportunity to perform in the next edition of the Festival alongside some of the largest orchestras in the world.

Reinvention the Enescu Contest in a pandemic

In 2020, the George Enescu International Competition offered more than music and competition. The message of the edition was Beauty in Life, and in the context of the pandemic, the Enescu Contest aimed to show that we all have the strength to adapt to the times.

The contest was reinvented online with a premiere in the world of international classical music - the first two stages of the sections were organized online, this measure being taken in order to run the competition in the context of the pandemic. Thus, 205 young artists were able to follow their dream and participate in the Contest, between August 29th and September 20th, 2020.

The Semifinals and Finals were organized in Bucharest, at the Romanian Athenaeum, between the 12th and 23rd of May, 2021, with the audience in the hall. A number of 21 young artists from 11 countries participated in the second phase of the George Enescu International Competition, in a premiere edition, for which the organizers made every possible effort in the context of the pandemic and its effects on the international artistic environment.

The big winners of the three sections are the cellist Jaemin Han (15 years old), from South Korea, the youngest winner in the history of the Enescu Contest; violinist Valentin Șerban from Romania (31 years old) and pianist Yeon-Min Park from South Korea. The three laureates were part of the program of the jubilee edition of the George Enescu International Festival in 2021, Jaemin Han and Valentin Șerban holding concerts with the Zagreb Philharmonic Orchestra, and Yeon-Min Park together with the Berlin Broadcasting Symphony Orchestra.

About the Enescu Contest

The George Enescu contest functions as an international launching platform for future world-renowned musicians and to promote the compositions of the great Romanian musician among the new generation of artists around the world, thus being a natural completionof the George Enescu Festival, the most important cultural event organized by Romania.

Since 2002, the Enescu Competition is a member of the World Federation of International Music Competition, being the only classical music competition in Romania organized in accordance with the standards and statute of the Federation.


Translated by Alina-Mihaela Burciu,
University of Bucharest, Faculty of Foreign Languages and Literatures, MTTLC, year I
Corrected by Silvia Petrescu
Return to Events