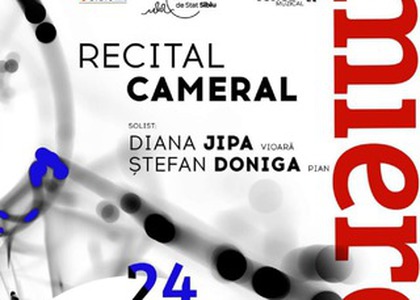 Pianist ȘtefanDoniga and violinist Diana Jipa will give a recital at the Sibiu Philharmonic on Wednesday, November 24th, at 19.00, with a premiere program based on an original, original concept: a collection of pieces by Romanian composers of various ethnic origins.

ROMANIA UNIVERSALIS is an original concept, meant to highlight the richness and diversity of cultural resources in the Romanian historical space. This intention is materialized by presenting a unique chamber recital program, consisting of instrumental miniatures belonging to Romanian composers or assimilated to the Romanian cultural space, but of various ethnic origins and coming from the main Romanian geographical and historical regions. There are also works covering over 130 years of music, the repertoire becoming particularly representative of what Romanian music as a whole means. Thus, along with Enescu's pages, there are creations signed by Béla Bartók, Walter Klepper, Alfonso Castaldi, Theodor Rogalski, Mihail Jora, Eugen Doga or Grigoraș Dinicu, but also a first absolute audition belonging to the composer Adrian Iorgulescu and created especially for the two leading performers. of the recital. Each of these works represents a special cultural universe, unique and very specific in itself and, at the same time, very important in the vast ensemble of the Romanian national culture.

The concept of ROMANIA UNIVERSALIS is therefore an affirmation of the universality of the Romanian culture not only from the point of view of its validity in the European context but also as a structural characteristic of it, an intimate vein, one of its unmistakable values.