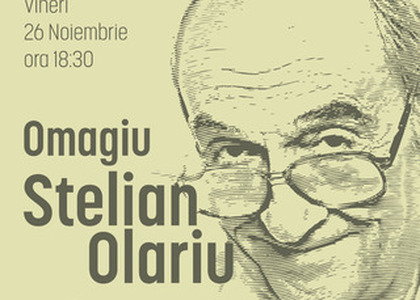 The Bucharest National Opera presents on Friday, November 26th, at 18:30, the concert "Homage to Stelian Olariu"

The Bucharest National Opera presents on Friday, November 26th, at 18:30, the concert "Homage to Stelian Olariu" in memory of the man who was the conductor having the longest and most remarkable artistic activity, 55 years, in the first lyrical scene of the country . The concert will be performed by the Bucharest National Opera Choir, accompanied on piano by Sabin Orbulescu, and the conductor Daniel Jinga will be at the conducting rostrum. With the participation of music critics Luminița Arvunescu, Oltea Șerban -Pârâu and Costin Popa.

Stelian Olariu took violin lessons in Timişoara, then he was a student at the State Conservatory in Timişoara. In 1950 he came to Bucharest to study pedagogy and chora lconducting at the "Ciprian Porumbescu" Conservatory.

After graduation, he was assigned to the Children's Palace (Pioneers' Palace), where he founded the Palace Children's Choir, which he conducted until 1966.

Six years later, he was appointed assistant choir maestro at the Bucharest National Opera, where he collaborated with the choir conductor, Gheorghe Kulibin. Since 1963, after the death of maestro Kulibin, Stelian Olariu took over the leadership of the Opera Choir as choir maestro, a position he held until his death, on January 29th, 2017.

As a choir maestro, he has prepared over 120 titles of opera, operetta and vocal-symphonic and participated in exceptional musical events in the country and abroad. He has participated in over 8,000 opera performances (at the Bucharest National Operaonly) and has toured in countries such as France, Germany, England, Italy, Switzerland, Spain, the Netherlands, Belgium, Austria, Hungary, Greece, Yugoslavia, Bulgaria, Russia. , Japan, Thailand.

Tickets can be purchased at http://tickets.operanb.ro/ and at theTicket Office of the Bucharest National Opera.

And because we want to stay healthy, we invite you to consult the rules for participation in shows available on the institution's website at the link: https://operanb.ro/regulament-de-participare-la-spectacole/


Translated by Ana Spînu,
University of Bucharest, Faculty of Foreign Languages and Literatures, MTTLC, year I
Corrected by Silvia Petrescu
Return to Events