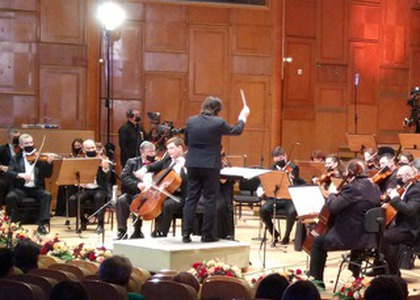 For Radio România, December 1st had a double meaning: Romania's National Day and the 10th Anniversary of the broadcast of Radio Chisinau, marked by the concert held last night at the Radio Hall. Details about the event - in the next report by Lucian Haralambie.

There is applause at the end of the concert that took place last night, at the Radio Hall. Every year, Radio Romania ensembles celebrated the National Day with a special event, and in 2021 a double anniversary took place, because it was also on December 1st, 10 years since the founding of Radio Chișinău.

On stage, reunited for the first time, the Radio Chamber Orchestra and the National Chamber Orchestra of the Republic of Moldova performed under the conductor Gabriel Bebeşelea. They proposed a program that highlighted multiculturalism. Starting from George Enescu and Bela Bartok, from whose birth we celebrate 140 years, from whose creation we listened to the Fantastic Pastoral and, respectively, the Romanian Folk Dances, the journey took us to the music of Chopin's Transylvanian disciple - Carl Filch, who at only 13 years old composed the Overture in D major performed in this concert. Then, one of the scores of Michael Haynd, former music director in Oradea for 2 years, and at the end, a work full of virtuosity and elegance around which this linkage was built - Concerto in D major for cello and orchestra by Joseph Haydn - in which the soloist was one of the most appreciated Romanian performers worldwide - Andrei Ioniţă.

"It was an absolutely wonderful experience! I've already gotten used to the Radio Hall scene - I've already had so many beautiful collaborations - but this special, festive occasion will stay in my memory for a long time. We're glad everything went that way and our brothers from across the Prut accompanied us on stage tonight. It was a very nice collaboration! " - cellist Andrei Ioniţă, who, at the end of last night's event, also offered two encores - The Ballad by Ciprian Porumbescu, in an arrangement for cello and orchestra, but also the Bouree from the 3rd Suite in C major by Johann Sebastian Bach.

Demeter Andras Istvan, former President and CEO of Radio Romania, spoke about this double anniversary celebrated at the Radio Hall: "I was very happy with this concert, I was very happy with the idea, I was moved by the repertoire. The orchestra reunited on this occasion and the soloist also believe that they gave that very, very special energy to this evening which, practically, was already an evening full of meanings. Just as I planned the release of Radio Chisinau on Romania's National Day 10 years ago, and tonight, this anniversary, I think that this concert is nothing more than a kind of commitment of Radio Romania that it will continue as Maria Țoghină initially started. I continued it and it was somehow complete during the mandate of OvidiuMiculescu.RăzvanDincă only has to continue what we started. It is a responsibility because the world is constantly evolving in our country, at Radio Romania, at Radio Romania Musical, and at Radio Chisinau. "

Conductor Daniel Jinga, manager of the Bucharest National Opera declared: "It was a concert in which the conductor Gabriel Bebeșelea once again showed us his quality as an extraordinary musician, a musician who respects both the original score and the instrumentalists, hemanages to perform concerts with the orchestra with which the spectators go home keeping it in their soul and mind. I was expecting this, but due to the quality of the performers, the quality of the works approached, I consider that this concert was a classy one, one suitable for December 1, National Day, and, why not, one suitable for the beginning of the new president-director. General, RăzvanIoanDincă. "

And cellist Marin Cazacu gave statements at the end of the concert at the Radio Hall: "An emotional evening, as Romania deserves, as Romanian musicians deserve, to be known, to be promoted. Romanian music was present this evening and was also the music of some composers born in Romania, even if they belong to other nationalities. A special experience between the two chamber orchestras - of Romania and the Republic of Moldova! It seemed to me that they gladly participated in being part of a common cultural circle. It is a special moment because, here are 103 years since the Union of 1918, when the two professional orchestras were together and celebrated together for all Romanians to enjoy music, to enjoy emotion. I also congratulate the orchestra, the conductor and, especially, the cellist Andrei Ioniță, who delighted us as always.

"The conductor and cellist Cristian Florea was one of the musicians who performed in last night's concert, in the position of the leader: "The meeting was very emotional! Very pleasant days! The colleagues from Bucharest are very kind and professional. The whole musical relationship was very harmonious, I was very happy to see Andrei Ioniță again, I am always happy with his successes. For the first time, I am with my compatriot, Bebeșelea, because he is also from Sibiu. I also watched him evolve, but we never had a chance to collaborate. A good conductor, precise, extraordinary! "

A festive evening at the Radio Hall about history, symbols and the importance of cultural values. At the end, the statement of Răzvan Ioan Dincă, President and CEO of Radio Romania: "The symbolism of this concert must take into account the fact that, in the recent history of Romania, the public radio also has a role of collective memory. It would be a pity or an inconvenience that when we have to mark an important event we do not record it, we do not reproduce it and thus we do not allow the generations that will come to understand how history was written. If we weren't constantly aware that we were writing history through our lives - better, worse; history, after all, does not judge in such terms - then I think we have not really fulfilled our mission. That is why such a reunited orchestra - the Radio Chamber Orchestra and the National Chamber Orchestra of the Republic of Moldova - brings a symbol that is important in this context and that marks these 10 years of Radio Chisinau. Not coincidentally, on Romania's National Day we can also celebrate the emotion of those from across the Prut with us and not forget what can never be "broken", namely the Romanian language. It circulates freely regardless of borders, regardless of geographical contexts and, in the end, so, somewhere, united in language, we can feel Romanian no matter where we are on this planet. "