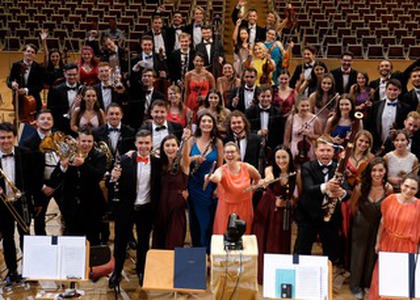 On December 6TH, the Romanian Youth Orchestra plays at Expo 2020 Dubai, on the Millennium Amphitheater stage

The Romanian Youth Orchestraconducted by Gabriel Bebeşelea signs the first major Romanian cultural event at Expo 2020 in Dubai, the soloists being the winners of the "George Enescu" 2021 International Competition, the violinist Valentin Şerban and the cellist ŞtefanCazacu. The concert will take place in the honor of Romania's National Day on the Millennium Amphitheater stage at the Dubai 2020 World Exposition, being scheduled in the evening of December 6th, at 6 pm. On December 7th, chamber ensembles from the Romanian Youth Orchestra will perform micro-recitals in the Romanian pavilion at Expo 2020.

The theme of the Dubai World Expo - Expo 2020, which takes place between October 1st, 2021 and April 1st, 2022, is Connecting Minds, Creating the Future and aims to affirm a global need for collaboration in order to inspire future generations.

The concert of the Romanian Youth Orchestra brings that specific note of optimism and confidence in the future that Romania's presence at Expo 2020 tries to inspire to the public, the musical program including works by Sabin Păutza, CiprianPorumbescu, Constantin Dimitrescu, Rossini, Mascagni, Saint-Saëns, Puccini, Glinka and Johann Strauss Son. The two soloists - who also play an original formula in the orchestra - will present two well-known Romanian works, Ballad for violin and orchestra by CiprianPorumbescu (Valentin Şerban - violin) and Romanian Dances for cello and orchestra by Constantin Dimitrescu ( ŞtefanCazacu - cello), the entire repertoire selection bringing color and joy, associating the youth of the musicians with the freshness of the proposed music.

The Romanian Youth Orchestra was formed in 2008 at the initiative of cellist Marin Cazacu, as an artistic and educational program, bringing together the best young musicians in Romania for a unique artistic experience that aims to achieve a high level of performance as an instrumentalist in a symphony orchestra. The Romanian Youth Orchestra is considered the best orchestra in Romania in the last few years, with a consistent activity internationally.

Before leaving for this concert, Marin Cazacu, the manager of the Romanian Youth National Art Center, "said:" It is exceptional for us to represent the country at such a level. We are not doing it for the first time, we have already been on three continents in the orchestra's over 10 years of existence, but this is the first time that the Romanian Youth Orchestra has been able to play in the Middle East. And the opportunity to be heard by an audience as diverse as the World's Fair is exciting for us. "

Mr Ferdinand Nagy, CommissionerGeneral of the Romanian Section for Expo 2020 Dubai, also stated: "With the experience of world exhibitions in Japan and China, as well as the long-term work of the International Bureau of Exhibitions (IEB), I am extremely pleased to see that in the context of this global pandemic, Expo 2020 Dubai demonstrates solidarity and aremarcable desire to return to our normal life. At the same time, I note that Romania's presence is a very special one, and the cultural events of the highest order - having as a peak the concert of the exceptional Romanian Youth Orchestra - place our country in the cultural top of the 190 participating countries. "

For detailed information related to the activity of the National Art Center "Romanian Youth" and the Romanian Youth Orchestra you can access www.tinerimearomana.ro or https://www.facebook.com/CentrulNationalTinerimeaRomana/

The Romanian Youth Orchestra was formed in 2008 at the initiative of cellist Marin Cazacu, as an artistic and educational program supported by the "Friends of Music - Serafim Antropov" Foundation and Lanto Communication. Since 2014, it has been operating under the auspices of the "Romanian Youth" National Art Center. This project brings together the best young musicians in Romania for a unique artistic experience that aims to achieve a high level of performance. The Romanian Youth Orchestra is considered the best orchestra in the country in the last few years, which soon stood out in terms of international music, appreciated by European critics as a top ensemble in the world. From the beginning, Cristian Mandeal was concerned with the formation of the ensemble. Under his artistic direction, the orchestra became a successful story in the Romanian music world. Through the performance of turning every concert into a memorable event, it gives the country an international orchestra that sets a standard for excellence. Currently, the project "Romanian Youth Orchestra - Enescian spirit and European tradition" involves various creative development activities. The aim of the program is to offer the possibility of training musicians in orchestra, to assimilate a rich repertoire by participating in masterclasses, and most importantly, to cultivate the pleasure of singing as a whole with internationally renowned conductors and soloists such as: Cristian Macelaru, Lawrence Foster, Horia Andreescu, Kristjan Järvi, Bogdan Băcanu, Sarah Chang, Amanda Forsyth, David Garrett, Stefan Geiger, Andrei Ioniță, Roman Kim, Elizabeth Leonskaja, Ivan Ludlow, PlamenaMangova, Valentina Naforniță, Olga Pasichnyk, Wave Quartet, Peter Sadlo, Olga Scheps, Emmanuel Séjourné, Aleksey Semenenko and Pinchas Zukerman.The result - a unique orchestra, acclaimed in concerts with the full hall of the Romanian Athenaeum, the Radio Hall, the George Enescu International Festival and on international stages such as: l'Auditorium Parco dellaMusica in Rome, the Ravello Festival and the Mahler Festival in Dobbiaco - Italy, March Music Day in Ruse, the Milan Youth Orchestra Festival, the Aix en Provence Festival and the International Festival of European Euroclassic Youth Orchestras in Berlin.

Since November 2011 the ensemble has been a member of the European Federation of National Youth Orchestras - EFNYO. Within this international body, the Romanian Youth Orchestra is an active participant in the MusXchange program, meant to ensure the best possible circulation of the most valuable young musicians in the programs run by youth orchestras in Europe.

Since 2011, the Romanian Youth Orchestra has been a constant guest at the George Enescu International Festival, marking numerous premieresover the years, in terms of the presence of a Romanian orchestra on major European stages, such as the Berlin Philharmonic, Berlin Konzerthaus, Musikverein and Konzerthaus in Vienna, the Pierre Boulez Grand Hall of the Paris Philharmonic, the Bozar Hall in Brussels, the Accademia di Santa Cecilia in Rome or the Elbphilharmonie in Hamburg along with the most important concert halls in important cultural centers such as Aix en Provence, Basel, Geneva, Lyon, Rouen, Ruse, Chisinau, Balti, Milan, Dobbiaco and Ravello in Italy, Linz, Salzburg, or Asia, Istanbul and Beijing, or the United States, as well as Romania, Sinaia, Brasov, Busteni, Sibiu, Cluj, Iași and Timișoara.

Considered an artistic project that has reached its maturity, the Romanian Youth Orchestra continues its journey in the world of quality music and international recognition, being an ensemble educated in a professional spirit and in an exceptional artistic environment.

In Romania, Gabriel Bebeșelea regularly conducts orchestras such as the National Radio Orchestra, the Radio Chamber Orchestra and the Romanian Youth Orchestra. Along with the Rundfunk-Sinfonieorchester Berlin, Gabriel Bebeșelea recorded for the first time in the world a CD with "Pastorale - Fantaisie pour petite orchestre" and the oratorio "Strigoii" by George Enescu. The CD was released at Capriccio in September 2018. At the same time, the scores of these works were published by the National Publishing House of the National Museum "George Enescu", Gabriel Bebeșelea having the merit for transcribing the manuscript of the work "Pastorale - Fantaisie pour petite orchestre" , but also for the editing and cleaning these Enescu works. Among the soloists with whom Gabriel Bebeșelea collaborates are Sarah Chang, Ray Chan, Simon Trpčeski, Robert Levin, Augustin Hadelich, Valentina Lisitsa, Leticia Moreno, Sayaka Shoji, Boris Giltburg, Dimitri Ashkenazy, Alexandra Dariescu, Daniel Ciobanu, AlexandruTomescu, etc. Gabriel Bebeșelea is known for his dedication to research and rediscovery of music, and is responsible for discovering many forgotten or neglected musical masterpieces. In 2017, in order to bring such music to light, he founded the ensemble of old and new music MusicaRicercata. A notable opera conductor, Bebeșelea was appointed Principal Conductor of the Iaşi Opera in 2011, becoming the youngest conductor in such a position in Romania. In 2015, he was appointed Principal Conductor of the Romanian Opera in Cluj. Outside Romania, he has directed productions of "Il viaggio a Reims" at the "Rossini" Opera Festival in Pesaro in the summer of 2016 and "Tsar's Bride" by Rimsky-Korsakov at the Perm Opera in February 2017. Both productions have enjoyed a resounding success. Gabriel Bebeșelea is the winner of the conducting competitions "Lovro von Matačić" (2015) and "Jeunesses Musicales" (2010), as well as the semi-finalist of the conducting competitions "Donatella Flick" of the London Symphony Orchestra (2014) and "Gustav Mahler" of the Bamberger Symphoniker in 2016.

During the Romanian National Opera Awards in 2014, Gabriel Bebeșelea was awarded the prize for "Best Conductor". In 2011 Gabriel Bebeșelea received a scholarship to the famous Royal Concertgebouw Orchestra Amsterdam, where he had the opportunity to participate in rehearsals and concerts and learn from some of the most important conductorstoday: MarissJansons, Bernard Haitink, Herbert Blomstedt, Cristoph von Dohnanyi, Philippe Herreweghe, David Zinman and EliahuInbal. Agraduate of the bachelor degree studies at the "Gheorghe Dima" Academy of Music in Cluj-Napoca in the class of master PetreSbârcea, and of the master's degree with master Horia Andreescu at the National University of Music Bucharest, in 2018 Gabriel Bebeșelea obtained a doctorate in music "summa cum laude" at the National University of Music Bucharest, under the guidance of Prof. Univ. Dr. Dan Dediu. Gabriel Bebeșelea is based in Vienna, where he graduated the University of Music and Performing Arts, in the class of Prof. Mark Stringer.

Valentin Șerban is the winner of the grand prize of the violin section at the George Enescu International Competition (2020/21 edition), after a final that raised the audience to his feet and in which he performed the Concerto in D minor for violin and orchestra op. 47 by Sibelius, at the Romanian Athenaeum.

Valentin Șerban obtained a bachelor's degree at the Transilvania University of Brașov and attended master's courses at the University of Music and Performing Arts in Graz, under the guidance of Silvia Marcovici. He has performed in Romania, France, Germany, Austria and Italy. He has been a member of the Les Dissonances Orchestra in Paris since 2018 and a guest concertmaster of the Romanian Youth Orchestra.

The cellist ȘtefanCazacu started his musical training at the age of 6, together with his father, the well-known cellist Marin Cazacu. He studied undergraduate and master's degree at the National University of Music in Bucharest, in the class of another important Romanian cellist, Răzvan Suma. Thanks to an Erasmus scholarship offered by the European Union, he completed his master's degree at the University of Music in Vienna (Universität fürMusik und darstellende Kunst Wien / University of Music and Performing Arts Vienna). He has attended advanced courses given by renowned cellists on the international music scene, such as Reinhard Latzko, Wolfgang Boettcher and Frans Helmerson.

He has given recitals in Romania, the Netherlands, Israel, Austria, Hungary, Germany and collaborated as a soloist with all the Romanian symphony orchestras, but also with the Chisinau Philharmonic or the Alicante Youth Orchestra. Among the conductors with whom he sang are Cristian Mandeal, Horia Andreescu, Cristian Macelaru, Camil Marinescu, Theo Wolters.

Since 2011, ȘtefanCazacu has been constantly collaborating with the Violoncelissimo ensemble, created by his father, Marin Cazacu, in 1992. Along with Violoncelissimo, ȘtefanCazacu has sung abroad, in big cities like Brussels or Washington DC, but also in the country, at Bucharest, Iasi, Timisoara, etc. In the last three years he has also became a member of the Placello ensemble created by cellist Răzvan Suma.

In 2021, Ştefan Cazacu won the third prize in the cello section of the "George Enescu" International Competition.