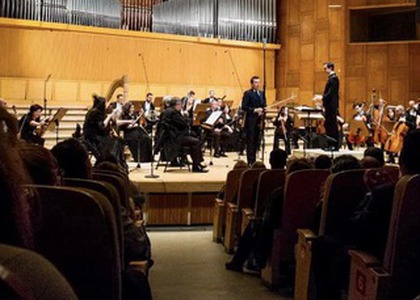 Last night, at the Romanian Radio Hall, was a concert held by Radio Chamber Orchestra, conducted by the Portuguese conductor, Martim Sousa Tavares. The event was dedicated to the 100th years since the birth of the writer José Saramago, born on the 16th of November 1922, winner of the Nobel Prize for literature. More details from a reportage by Ioana Ţintea.

Teresa Macedo, the ambassador of Portugal in Bucharest: "The program was designed and established by our conductor, Martim Sousa Tavares, togheter with the director of the Radio Orchestras and Chorus. Through the selectged works we tried to present creations of the Portuguese composers, who belong to a different era, like the baroque one, the romantic or the contemporan one, achieving this way some kind of balance. All the work submitted are aclosely linked with the life and activity of the writer José Saramago."

The second part of the concert started with a short festive moment, during which the violonist Alexandru Tomescu has been offered The Excellence Award of the Romanian Union of Music Critics, Editorial and Producers.

Luminiţa Arvunescu, the President of the Union: Founded in 1990, the Union of Music Critics, Editorial and Producers has always rewarded the excellence in the artistic field and of the music journalism. We hope to achieve againg, according to tradition, a gala of the Union of Music Critics, Editorial and Producers Awards, at the beginning of January, in such a way that, the remarkable personalities of 2022 to be offered their recognition. We offered three excellence diplomas, in March, to the soprano Nelly Miricioiu at her 70th anniversary, two weeks ago, to the conductor Cristian Măcelaru, marking this way 10 years from his debut in Romania. And tonight we have offered an excellence diploma to the vilonist Alexandru Tomescu.

Laudation given by Liliana Staicu, the Director of the Radio Orchestras and Chorus: "What I really aim is to portrait in just a few words is a picture of Alexandru Tomescu, the man, the one involved with all his powers in charitable projects, which he carries out with the same passion with which he performs. In children's education, because he is also ambassador of the project "Listen five minutes of classical music", run by Radio România Muzical for more then 10 years, in events meant to attract the genral public to classical music, the man Alexandru Tomescu is an immor of nature and the mountain, a wonderful husband and father, and like you have heard, a radio person. I know that words caanot describe the best of Alexandr, but his music and actions."

Alexandru Tomescu, thanking for the given distinction: "Thank you very much. I am very excited, very honored for this award. In two weeks exactly, we celebrate two decades since I am the soloist of the Radio Orchestras. This stage of the Radio Hall had become my second home, my artistic home, first-class and I assure you that, togheter with my colleagues, we do our best, we give our soul for you."

Impressions from the audience, at the autograph session given by the violinist, at the end of the concert:

-I am a Radio România Muzical listener, constantly.

-Personally, my breath was cut off when I heard him.