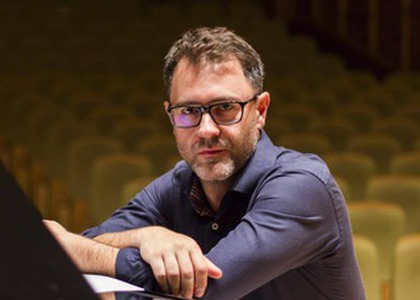 Pianist Ștefan Doniga is going to give a new series of online recitals, together with violinist Diana Jipa, under the title INTERMERIDIAN. In the interview below,we will find out more details about this new project, but also about the one that takes place during this period - REDISCOVER ROMANIA-.

You were one of the first Romanian artists to adopt the transition to the online environment after the beginning of the pandemic, and the series you are proposing now, Intermeridian, also takes place on the internet. Would you say you got used to this environment?

Yes, my collaborators and I certainly got used tothe duo with Diana Jipa and I don't know what to say here, unfortunately or fortunately, we got used to this alternative. We have rather adapted to its form of expression. Unfortunately, because we are forced to resort to this artistic exhibition of ours, fortunately, because it makes us think, be out of the box, as they say now, try new forms of expression, new forms to show what we do to the public. All in all, however, it is the only chance to keep the frequency of our public release and also the musical and artistic content we want to show.

How and where will the recitals within the Intermeridian series take place?

Intermeridian is a project that we started with the support of the Romanian Cultural Institute and the Union of Composers and Musicologists of Romania, a year and a half ago. Therefore, the one we are proposing now is the third edition, and it is obviously called Intermeridian online. There will be no recitals, because that is the situation, but they will be present in museums of modern and contemporary art in the country. In fact, right now, that meansthe online Intermeridian series. We go further with the way of expression we had in Rediscover Romania, namely, we visit very beautiful places, very consistent from a cultural and historical point of view in the country and we fill these visits of ours with our musical presence. So, because from the beginningIntermeridian was a project dedicated to Romanian contemporary music, we chose to combine music with modern and contemporary plastic art and for this we chose six museums in the country, where there are concert pianos. So, these six places will be Kalnoky Castle, from Microșoara, from Covasna County, wherethe museum of Transylvanian life is the Ethnographic Museum of Transylvania from Cluj, where is a beautiful hall, where Franz Liszt even sang will follow. We will also record our music there. Then there will be the painting collection signed Petru Botezatu, a remarkable plastic artist. We will continue with the Nicolae Sofianuprivate collection, from Râmnicu Vâlcea, an admirable patron of the arts in the area. We will then go to Constanța, for the Nicolae Grigorescu and Ion Jalea museums and the project will end at the George Enescu Museum in Bucharest, on December 1st.

Please tell us a little about the works in the program of this edition.

We are happy to include works that are close to our heartsin this program. On one hand, works that we had in the Ladies of Romanian Musiccollection, on the other hand, creations that we discovered later and that grew on us. Therefore,there will be a part of female creation, Carmen Petra Basacopol, Felicia Donceanu, Hilda Jerea, but also works signed by maestros Adrian Iorgulescu Ulpiu Vlad, Roman Vlad. There will be works by Paul Constantinescu, by Dinu Lipatti, which we also had in our collection, Lipatti, a piano suite by Remus Georgescu, to which I am very much attached.

The "Rediscover Romania" project is nearing completion. How was it received by the public?

I am happy to tell you that the reception from the public has been a consistently increasing one, because this reception from the public can only be quantified in the views we have on the materials we present. The materials that we filmed all summerwill continue to be distributed until the distribution of the materials from the Intermeridian project will start. So, if we started from somewhere from 6-10,000 views per event, the presentations of the episodes from Brăila, for example, have now reachedup to 50,000 views on Facebook and are not yet placed on Youtube. Where in fact, they will stay and gather views.