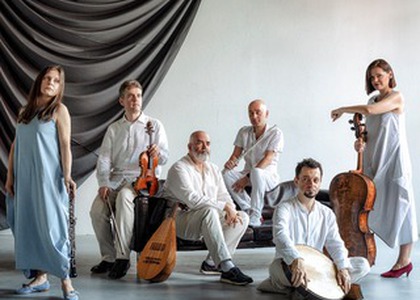 A collection of three records by the ensemble Imago Mundi came out at Casa Radio Publishing House.

First of all, I would like you to tell us about the ensemble you are part of. How and when

did it become a thing?

Imago Mundi has been around since 2001. Therefore, next year we will celebrate 20 years of activity. We have started with old European music, Medieval and Western European Renaissance music, and little by little we ended up in this area of old and traditional Romanian music- anyway, music which we do not interpret as such, but rather pass through our personal filter and bring to the area of contemporary music.

The album that you released features three records, each of them dedicated to a Romanian man of culture- DimitrieCantemir, George Enescu and Constantin Brâncuși. How did you associate these personalities with the content of each cd?

The Isvor trilogy is also celebrating an anniversary, let's say. In 2010 we were launching the first project of the series, dedicated to DimitrieCantemir. Then, some years later, we launched the one dedicated to George Enescu. Respectively, the most recent one is dedicated to Constantin Brâncuși. All three albums are marked by the exploration of the influences that this music had or, as in DimitrieCantemir's case for instance, we explored the traditional Romanian music and its relation with the music that Cantemir wrote in The Book of the Science of Music, dedicated to Ottoman music. In Enescu's case, we explored traditional music and urban folklore- themes which Enescu employed in the Romanian rhapsodies. Moreover, in the case of the project dedicated to Constantin Brâncuși, we reconstructed Brâncuși's visual and sonorous world. We started from the world of Gorj, where he was born and evolved spiritually, to the world of Paris, which fulfilled him both artistically and culturally. So, there is this common thread.

What was the process that you went through to obtain the traditional compositions? Were they selected by members of the ensemble or published beforehand?

They were published beforehand. We are a 100% contemporary ensemble. That is to say, the research methods are among the most diverse. I would like to mention that what we perform represents, first of all, musical compositions and arrangements by CătălinȘtefănescuPătrașcu, guitarist and composer and one of the members of Imago Mundi, as well as what we build together during rehearsals and the area of ​​free interpretation.