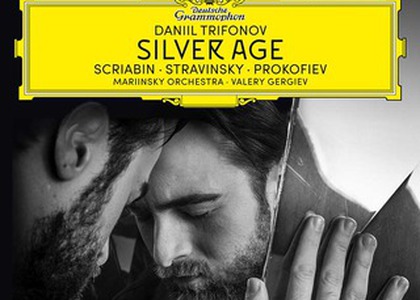 An album released on November 6, signed by the famous Russian pianist DaniilTrifonov - Silver age, a double disc which contains works for solo piano recorded at Princeton University in the United States in January 2019, and concerts recorded together with the Mariinsky Theater Orchestra, directed by Valery Gergiev in St. Petersburg in October 2019.

Silver age- the era of the silver- the beginning of the 20th century, profoundly influenced by the modernism of Russian composers. From Igor Stravinsky, who was writing for Diaghilev's ballet company to the esoteric Aleksandr Scriabin and the cinematic Sergei Prokofiev- an entire world who put a heavy accent on the music of the 20th century.

In 1896, two years after the first modern work had appeared in the history of music- that is, "Afternoon Prelude to a Faun" by Claude Debussy, Aleksandr Skriabin was composing his only concert dedicated to the piano, its opposite with number twenty. A work in which romanticism is well present, yet, from where we bring to mind the buds of language from the mystical Poem of bliss.

Silver age is a maturity test for DaniilTrifonov. At 29 years old, he is already a world-wide star of the piano, establishing himself as a further extension of the Russian Piano School, which offered so many far-reaching artists throughout the 20th century. Passionate, talented, truly immersing in the essence of music that he performs, DaniilTrifonov is a great pianist who records from 2013 for the famous Deutsche Grammophon house. Rahmaninov, Liszt, and Chopin are the composers approached on the previous six tapes by copyright-romanticism in its all aspects. Here he is, in the world of Russian modernists, dazzling with poetry and still, with sharpness in this colored universe, which gave the tone for the entire globe in the first years of the 20th century. In 1910, Igor Stravinsky achieved great success with the ballet he had composed for Sergei Diaghilev's company-Firebird. Three notes from this piece of ballet music were transcribed for the piano in 1928 by Guido Agosti.

In 1913, Sergei Prokofiev ended the second piano and symphony concert of his invention. However, the sheet music was lost in the storm of revolution. It was only in 1923 when Sergei Prokofiev recreated that score, and in a visible way the result was very different from the original version; even Prokofiev said that this one would rather be his number 4 concert- he had made the third one out in 1921.

A real challenge for the pianist, this Concert no. 2 by Prokofiev enjoys the sophisticated and very balanced performance of pianist Daniil Trifonov, accompanied by an orchestra that knows this repertoire very well, compact and efficient: Mariinsky Theater Orchestra, conductor Valery Gergiev.

Russian music of the early twentieth century, in all its splendor, is performed by a Russian pianist who perfectly understands this universe and who has all the instruments to be able to interpret it in full session. Daniil Trifonov does not impress with his technique, which he puts strictly in the service of the musical aesthetics; he is the type of intellect pianist, perfectly tuned between reason and emotion. Here are the Three movements from the music of the Petrușka ballet by Igor Stravinsky, a creation of 1921, which Stravinsky especially wrote for Arthur Rubinstein, 10 years after the premiere of the original ballet. It is one of the most difficult modern orchestrations, with an explosive effect on the audience, wonderfully performed by Daniil Trifonov.