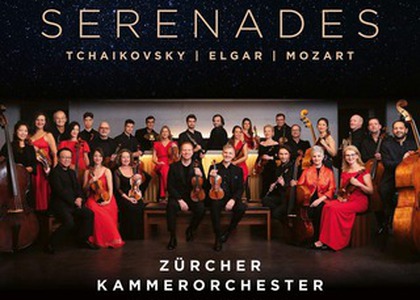 An album debuts on the 29th of January 2021 by House Detsche Grammophon, signed by the Zurich Chamber Orchestra, led by Daniel Hope premiering on Radio Romania Muzical on the 8th of February, at 19:00.

An album, which contains famous serenades by Mozart, Elgar and Tchaikovsky, a disc recorded in September 2020 under pandemic restrictions - a message full of optimism about the power of music and its soothing aura. A shining disc with an energizing repertoire and an orchestra in great shape. Daniel Hope's influence can be felt, which we know from previous years and who welcomed us daily in his living room in Berlin since March 2020, for concerts broadcasted online - a man full of positive energy, warm, calm and very confident that in the end, everything will turn out ok.

This is ultimately this disc's message - the belief in a good outcome, which we shall all partake in together one day, a day that is getting closer and closer.

The Romanian violist Cristian Andris is among the members of the Zurich Chamber Orchestra who took part in these recordings.

For how long have you been in this orchestra?

In the year 2012, I passed the audition for the position of a permanent collaborator and I have been a member of this ensemble for 9 years now. I met Daniel in 2016 when he came on board as artistic director. I must also mention that he sings in the orchestra's interior. He sits on the concertmaster's seat and from there he coordinates the entire orchestra. Having such a musician among our group is extraordinary because Daniel has incredible energy. I can say that he is one of the most positive and energetic musicians I have ever worked with so far. I never saw any sign of fatigue from him in all these years, he always has a smile on his face, he is positive and constantly interacts with all members of the orchestra. Even if he sings all around the world - he has an ensemble in America, where he works as artistic director - simply put, I think he knows the stories behind every musician. And when I got my doctorate, a few years back, he congratulated me and said "Ahh, mister Doctor, you are the first Doctor of this orchestra!", and not in a joking manner but out of respect for the effort required to receive a doctorate.

We saw Daniel Hope around Bucharest as well, but I think most of us started watching him in March 2020, ever since he started organizing in his living room the series of concerts Hope at Home, speaking of which, has also been turned into a disc at house DeutcheGrammophon, same for the latest serenades disc. Now, of course beyond this absolutely flamboyant personality he has - his humanity, good will, interest and support for musicians can be seen… but how is it for the musicians of the orchestra to sing, without an actual conductor, due to current circumstances?

In the Zurich Chamber Orchestra, I must mention that approximately 80% of projects have no conductor. They play, usually with the concertmaster. As a result, we have a formula for extended chamber music, a quartet, quintet. The concertmaster gives the openings when necessary, including when we have wind instruments. However, it must be said that the chamber orchestras' repertoire is not as vast as the repertoire of the symphonic orchestras. The scores that we perform are scores that are part of the orchestra's repertoire. For example, first cellist Nicola Mosca plays the entire repertoire by heart, he has the stand in front of him, but only because the rules state you must have a stand in front of you, but he does not have music sheets on the stand. For example, only if a new score written by a contemporary composer is used, then he will play two repetitions on the music sheet and then he will play by heart. This is why the scores on this CD are scores that are part of the repertoire and I will tell you later more precisely how long it took us to record this CD and how we made it. Nevertheless, simply put, because the chamber orchestra's repertoire is restrained, the people who are part of the chamber orchestra know it very, very well and that can be heard on this CD.

This is exactly the next question. How did the recordings of this disc made in September 2020 pan out during pandemic lockdown?

Because at that time they could not perform with the public in certain countries, all orchestras across the world had two options. One, to perform in other countries with the public, which was the case for this project, as we went to Germany for two Concerts in Essen and after which we returned to Zurich the second day. We arrived in Zurich at 2pm, by 3 we were already in the studio with the people of Teldex in Berlin, and we recorded until 10pm. The following day, again, two recording sessions. This CD was recorded in 12 hours. And the repetitions before this project…I think we had three or four repetitions, but seeing as the musicians of the Zurich Chamber Orchestra know these scores so well, they didn't need so many repetitions.

And what I really like about this CD is that the music is played very lively, very energetic, it feels genuinely fresh, it doesn't feel like a routine. A big threat for orchestras is the possibility of turning the craft into a routine, to no longer be as motivated to perform in concert or on CDs. I can feel the freshness of youth in this CD and regarding sound, I feel it speaking directly, I can really imagine that I am in a concert hall and the sound is resonating from the entire hall. I think Daniel made a very good decision because in the context of the pandemic the morale of the musicians and of the public was tested. With scores such as Serenade for Strings by Tchaikovsky, Serenade for Strings by Elgar and even Einekleine Nachtmusik by Mozart… simply put listening to this CD lifted my spirits up and I almost forgot about this pandemic context. This is why I consider the decision to be very, very inspired. And even if there exist countless other recordings of these scores on the market, this CD should be listened to because it is performed at a very, very high level.

Yes and with a different vision, even. Perhaps less for Tchaikovsky and Elgar, where it is performed in a more classical manner, but when it comes to Mozart, it is true, you discover new things while performing it. Varying accents, some varying phrasing…Where do all of these come from? From Daniel or is it the orchestras' contribution, in general?

It must be said that the Zurich Chamber Orchestra loves baroque music and I can say that the period between baroque and classical music is performed most often in a very baroque manner with baroque tuned instruments, with baroque bows and this is in the orchestra's DNA. Baroque music requires a lot of improvisation and the musicians of the Zurich Chamber Orchestra, by being allowed to have freedom during the performance, simply perform what they feel in the moment. Of course, we talked about some more specific aspects as well, but we are trying to allow for as much improvisation as possible. Simply put, knowing things so well we have the freedom to communicate without words and to challenge each other to maybe make somewhat different choices.

There would be a bit to talk about the technical quality of the recording as well, which is always a challenge in this pandemic period. I assume you all performed distanced or did you not?

Exactly and for the sound engineers, this is a challenge, to make a recording, which is in fact not realized under normal acoustic conditions, to sound normal. So if you have this information, tell us how the recordings have been managed from a technical point of view.

We just had the microphones in the hall and as soon as we recorded something, we went below in the control room to listen to our performance alongside the sound engineers. Obviously, for a CD you need to exaggerate certain things in order for it to do well and we wanted to see if it was too much or too little. This is why most of the orchestra moves down to listen every time recording stopped so that every party would know if they performed to much or too little.

And one final question about a comparison. Tchaikovsky's Serenade was interpreted by the Romanian Chamber Orchestra led by Cristian Macelaru, during your first concert in Bucharest, it is also on this disk - with you in both distributions. What are the differences, as you see them?

For me, in general, music happens in the moment, same goes for inspiration. I can say that the Zurich Chamber Orchestra's interpretation is one with 10-20 years of performing this score under its belt and certain traditions exist which have been formed over the years. I realize each time we perform - once every two or three years - This score with the Zurich Chamber Orchestra, we perform the same scores differently from other orchestras during certain moments, which are part of the orchestra's tradition. It is true there is also a difference, we do not constantly perform the exact same version, but somehow there is an interpretation inside the orchestra's DNA.

For The Romanian Chamber Orchestra, the performance being the first project of the orchestra, it happened in that moment. It was one of those scores in which we performed together for the first time and got to know each other musically. So somehow, because I wasn't sure what the other musician would do, it was not as obvious what would happen next, as opposed to the Zurich Chamber Orchestra where, I know what we must do in general.And maestro Macelaru told everyone: "Be ready! I am about to do something different in the concert from the repetitions!" and I think through those words he wanted toconstantly maintain the orchestra's attention.