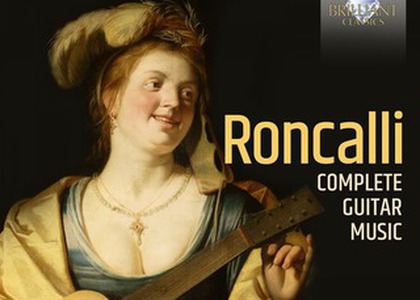 I present to you the most recent album of the Austrian guitar player Bernhard Hofstötter, nominated three times at the ICMA Awards and one time at the Opus Klassik. The album, released on the 28th of May 2021 under the record label Brilliant clasics consists of two CDs and is entitled " Ludovico Roncalli-complete guitar music".

It contains all the nine well-known sonatas-in fact, suites, written in differents tonalities and printed in 1692. A representative of Baroque style, Count Ludovico Roncalli was a formidable guitarist and composer who left for posterity this collection of works of the guitar repertoire, with a rafined melody and total freedom for the artist, as he had left no indication regarding the musical florishments or the technical aspects of the interpretation.

Recorded on a baroque guitar, the suites unfold in a new and intepretative way, Bernhard Hofstötter approaching them in an elegant and raffined manner, phrasing them expressively and highlighting the chromatic of the timber. Included in the project " Records of the year 2021" and broadcasted by Radio România Muzical, the album can also be found on the page dedicated to the project on romaniamuzical.ro