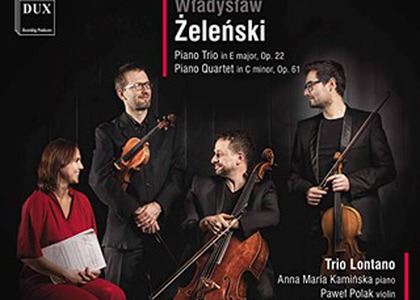 In premiere at Radio România Muzical I present you the album "Władysław Żeleński- chamber music" dedicated by the Polish ensemble Trio Lontanoto the commemoration of the 100th anniversary of composer Władysław Żeleński's death. The album was released on May 21st, 2021, by Dux Recording Producers. Musician Żeleński is one of the noteworthy representatives of Polish Romanticism, who founded and managed The Academy of Music in Kraków, up until his death in 1921. Trio Lontano, consisting of pianist Anna Maria Kamińska, violinist Paweł Polak and cellist Grzegorz Vytlacil, has selected from Żeleński's musical oeuvre two chamber music works to record. I decided to present you Piano Quartet in C Minor, Op. 61, for which the Polish ensemble collaborated with the young violist Adrian Stanciu, from Iași.

Trio Lontano came to life in 2009, and the name refers to the repertoire chosen by the band- lesser-known and rarely performed pieces of music, from all times, and especially Polish chamber music. Trio Lontano is one of the musical ensembles with in the "Stanisław Moniuszko"Podlasie Opera and Philharmonic, at the European Art Centre in Białystok. I appreciate the fact that Polish musicians promote their national musical creation elegantly, with the help of recordings of a very good interpretative and technical quality. Moreover, the idea of bringing forth two chamber music works by Władysław Żeleński proves to be excellent as an homage to the 100th anniversary of his death. This way we can rediscover Żeleński'scomplex creation, with the unmistakable Romantic sonority and enjoy the collaboration that Trio Lontano made with Adrian Stanciu, the violist from Iași. We have heard of him ever since he was part of "Giocoso String Quartet", that came to life at Iași and emerged internationally.

"Władysław Żeleński- chamber music" is part of the Radio România Muzical project "2021 Records" ("Discurileanului 2021") and can be also found on the project web page, on româniamuzical.ro