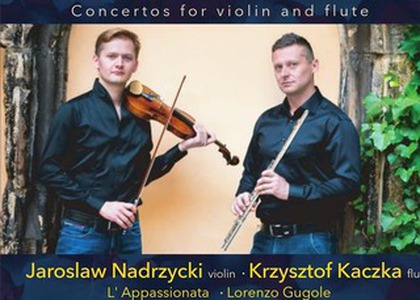 For the first time on Radio România Muzical, I present to you the album "Johann Sebastian Bach - concertos for violin and flute" produced by Polish soloists - violinist Jarosław Nadrzycki and flautist Krzysztof Kaczka, accompanied by the L'Appassionata Chamber Orchestra (Lorenzo Gugole, concertmaster), and released on July 2nd, 2021 by the Hänssler Classic record label.

In the quarantine of 2020, Jarosław Nadrzycki and Krzysztof Kaczka, neighbours in Kuwait (where they were carrying out teaching activities), decided to produce an album together, for which they chose concertos of Italian inspiration composed by Bach. In the summer of last year, the two musicians recorded 4 concertos in Italy, in collaboration with an ensemble established in 2019 by Lorenzo Gugole, member of the Symphony Orchestra in Rome.

These are two musicians whose resumés include Romania as an important reference. Jarosław Nadrzycki is the 2009 prizewinner of the George Enescu International Competition. Since then, he performed on prestigious stages, such as at Bozar and in Moscow, and returned to Romania for concerts with the Philharmonic Orchestras in Bucharest and in Cluj-Napoca. In 2011, he recorded a CD which also includes Enescu's Sonata No. 3 for violin and piano.

Flautist Krzysztof Kaczka is a frequent performer on the posters of the renowned Carnagie Hall, but he also performs all around the world, and as the eastern region is of prime importance to him, he also has a connection with our country. In 2020, Krzysztof Kaczka appeared on the show 'Romania's Got Talent' where he stunned the public by playing an arrangement of Mendelssohn's Concerto in C Minor, while simultaneously doing a series of cardio exercises. At the beginning of 2022, Krzysztof Kaczka will release a CD dedicated exclusively to the Romanian compositions for flute, with pieces by Bartok, Enescu, Elinescu, Rotaru and Jianu, in collaboration with the Armenian pianist, Lilian Akopova.

Produced during the pandemic, the album "Johann Sebastian Bach - concertos for violin and flute" emphasizes the qualities of the Polish musicians Jarosław Nadrzycki and Krzysztof Kaczka, brilliantly accompanied by the L'Appassionata Chamber Orchestra. The two soloists offer us a fresh version of the famous concertos of Italian inspiration composed by Bach, interpreted with a refinement based on a very good technique.

The album is included in the "CDs of the year 2021" project developed by Radio Romania Music, and can also be found on the project's page on the românia-muzical.ro website.