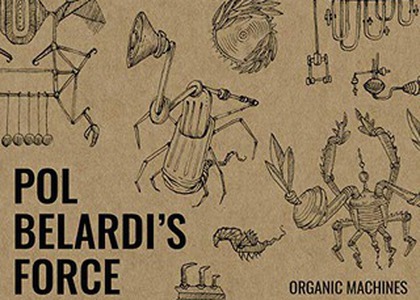 From the first sound produced, in the 90s, curiosity and imagination were aroused in the Luxembourgian Pol Belardi, full of desire of making music. After studying at a local school percussion, piano, rhythm, music theory and afterbeing part of the symphony orchestra and a rock band, the versatile Pol left for Brussels and Amsterdam, where he deepened the bass guitar, with which he got creative in several projects, various in style and instruments, becoming a prolific composer.

Returned to Luxembourg, he leads several groups, including Pol Belardi's Force, a quartet with a distinct approach, in an aesthetic already common in the European landscape, which keeps the nowadays listener's ear attentive. All four of them have a diverse musical past and they do not hesitate to take advantage of this in their fresh embrace of improvised modern music, expressed through Belardi's compositions, defined by strong grooves, melody, refined harmonies, cleverly used spaces, tension and relaxation, different states, close interaction and good mood.

In 2017 they won the "Best Band" award in Sibiu and in 2019 they released the album "Organic Machines", an excellent production which brings them to the front line of the European scene, against the backdrop of a very generous offer in the same musical area. Festivals always give us new names, and when they discover something distinct, authentic, they happily share it with everyone.