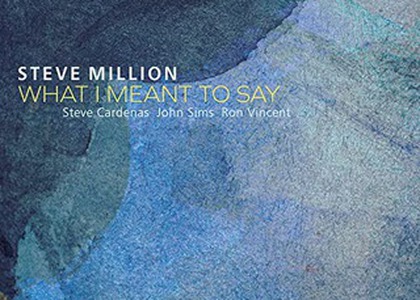 We start today with an album made in the light of the compositions of an exceptional pianist from Chicago, but also of the close, lasting relationship, which extends over decades, between the musicians involved. Steve Million met the guitarist Steve Cardenas and the drummer Ron Vincent at the end of 70s, when they had a good time improvising at a party where they were hired. In the 80s, their bond got stronger thanks to their time spent together and thanks to their concert by the name of "Four Friends". After some changed formulas, the group ceased their activity, a part of the musicians spread in different parts of the United States, but both music and their friendship stayed in their hearts permanently. Fortunately, in 2019, Million, Cardenas and Vincent added to their quartet the bassist John Sims and they recorded together "What I meant to say", a balanced and refined album, with a comforting fluency, musical in themes and improvisations, clearly defined by the relationship between the musicians, who enjoy the reunion and the sound stability kept intact for decades. This was a reunion in which Steve Million is not only an elegant pianist, but also the author and the arranger of the whole repertoire that ranks above the average of what we listen in recent times. Consonant with Milliom, Cardenas points to his calm, stable presence, through intelligent accompaniment or eloquent solos. The duo forms a stable, impressive core, supported by the old friend Vincent and their new friend, Sims. The group "Four Friends" no longer exists, however the music is rewritten by these old friends who in the meantime have learned more about the tunes that unite them and put it all together in the form of a wonderful album.