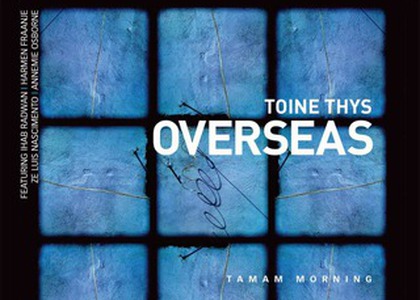 We continue with "Overseas", the story of the meeting between the Belgian saxophonist Toine Thys and the Egyptian Ihab Radwan, a master of the traditional instrument called oud. After they met several times on the European stages, they formed a group to complete their unitary vision, in the noble tradition of musically uniting the East with the West, of linking cultures separated by seas through original and inovative creations. The project also includes the percussionist Ze Luis Nascimento, the cellist Annemie Osborne and the pianist Harmen Fraanje, all prepared for a repertoire consisting of clear, free compositions, with generous melodic content, which require virtuosity and spontaneous interventions. At the meeting between oriental music and jazz kinds, between classical music and Brazilian rhythms, between score and improvisation, the group connects evolutionarily, listening carefully, filling their spaces with tenderness. Different worlds, different intonations, discreetly speculated oppositions from which we all benefit, in a space where everyone's integrity is respected, and both adventure discovery remain essential. The album "Tamam Morning" takes place in an appealing balance.