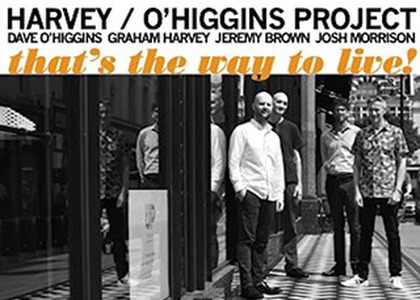 We're stepping again into the comfortably arranged space dedicated to the artists who, despite having a schedule as full as their value requires, find the time and the state of mind to focus on a consistent production, one of great quality that would attract smiles and signs of approval. Beginning with the title, "That's the way to live" is the perfect illustration of this kind of success. The album is signed by the saxophonist Dave O'Higgins and the pianist Graham Harvey, with the rhythmic support of bass player Jeremy Brown and the drummer Josh Morrison. They're all first class musicians in the british jazz scene, thus forming a unified ensemble of mutual knowledge and musical intimacy. The quartet has a clear plan, devoted to tradition, combining the original compositions with the standard musical pieces while kepping the continuity of the thread leading down to the small groups emerging in the 30's after the age of the great orchestras. This link brings melodic and harmonic clarity and a rithm to stir the music in the right direction. Jazz was created from swing, blues and folk which is why the possibilities of keeping it fresh are limitless. "That's the way to live" offers a fairly agreable version of this neverending thread of free and inspired creativity formed on the basis of a familiar language.