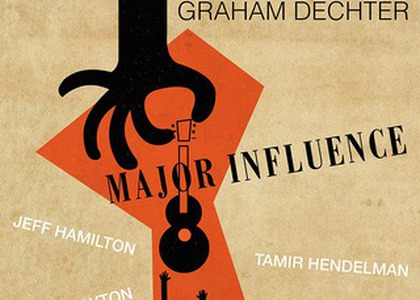 Today we're listening to the guitarist Graham Dechter and his third leading album, reunited in his favourite format, with Tamir Hendelman for piano, John Clayton for double bass and Jeff Hamilton for drums. "Major Influence" is an album with songs written bearing in mind the major influences that Dechter was subjected to as a young musician. He mentions here Herb Ellis, George Coleman, Barney Kessel, Milt Jackson, Ray Brown and, indisputably, Wes Montgomery.

The more an artist evolves, the more he discovers and recognizes in terms of sources of inspiration, so such a list has no end, instead, it is the basis of any accumulation of values. The album reflects on his journey from the age of aspirations to the high-profile musician, active in the selective group of great instrumentalists, going through some essential points where we can recognize the essence of jazz, the starting point that, in time, brings maturity and refinement: swing, blues, improvisation and emotion. An amazing set of songs with direct access, distilled from the strongest and purest essences that a musician could absorb.


Translated by Cristina-Bianca Ion,
University of Bucharest, Faculty of Foreign Languages and Literatures, MTTLC, year I
Corrected by Silvia Petrescu
Return to Jazz