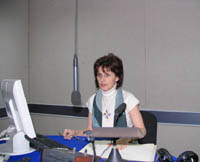 A radio program which until 1995 used to broadcast operas in the Radio Record Library was transformed by Luminita Arvunescu into a successful show which promoted contemporary international works performed at the time across the globe. For all this it received in 1998 the Musical Critics Union Award and in 2008 the Musica viva Award given by the Romanian Music Forum, but what was most important was that it gained the appreciation of all artists and opera enthusiasts – because the program offered them exactly what they lacked: the possibility to tap into the international opera scene at any given time.

A program which has archived up to this day dozens of interviews with great personalities such as: Placido Domingo, Maria Guleghina, Denyce Graves, James Levine, Thomas Hampson, Bryn Terfel, Renee Fleming, Ramon Vargas, Angela Gheorghiu and Roberto Alagna or with legends such as Luciano Pavarotti, Beverly Sills, Virginia Zeani and Ileana Cotrubas - all this being another argument for it to have a high rating.

Saturday evening you can “collect” CD’s at first hand , a most agreeable get-together, hosted by Radio Romania Music and Radio Romania Culture.

"We have rerouted An evening at the opera towards the live international satellite broadcasts and recordings more than ten years ago because I was feeling the need to browse the sheets not only in the classic artistic manner but also in the contemporary technical way.
I wanted back then to be “in trend” with the world; and the fact that today, An evening at the opera has its own program of live broadcasts makes me feel very glad and is a constant motivating factor.
If you should ask me: where do I see myself in five or ten years’ time? I would answer in a heartbeat: An evening at the opera - perhaps not just here, but in any case still a part of the show because my Evening at the opera is inexhaustible!”