A Portrait of the Composer - Antonio Vivaldi with Marina Nedelcu 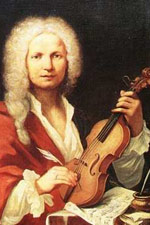 From Bonn to Vienna (the two capitals affected by Beethoven’s music) to Venice; the lagoon landscape shining under a Baroque sun. In other words, ‘A portrait of the composer’ changes its profile for a short while in order to embrace the traits of Vivaldi’s music – legendary red-haired priest, known more at his time after this particularity. He was born in the Holy Republic on March 4th 1678; the same day the city was shook by an earthquake. We can think of another tremor – figuratively speaking – with profound repercussions for the musical universe, based on a biography filled with unknown variables that we shall try to solve through music itself.

Antonio Vivaldi - probably one of Legrenzi’s students, learned to play the violin from his father, a barber but an excellent violinist. At age 25 he becomes a priest and joins the professorate at the Ospedalle della Pieta, taking in the extremely laborious musical education of Venice’s young daughters. In 1711 the L’Estro armonico cycle appears, still retaining the concerto grosso pattern, promoted by the likes of Corelli and Handel. From here on Vivaldi will develop hundreds of variants of the instrumental concert, so that all the instruments of that respective era will receive the role of first soloist within the great family of Vivaldi’s concerts. Of course, the violin is the most important protagonist, as it stands apart through ingenuity without precedent at that time.

Vivaldi – the opera creator is less known to us as this passion of his seems somewhat incompatible with this ecclesiastic background. Nevertheless we find him to be a more prolific writer than Scarlatti the Father, but he is surpassed by the likes of Caldera, Hasse and Handel. He has written no less than 24 operas, only 14 still existing in complete manuscript at the Turin Library. It is an area which will open its doors to us, always having in its background the image of his prim Donna, Anna Giro. These are, in brief, the things that this ‘Portrait of the composer’ deals with.

Antonio Vivaldi at Radio Romania Music – a painting that we wish to be as complete as possible, as we deal with a kind of music where we can decipher a vane artist, with an extraordinary imagination, who, as they used to say, composed with far greater speed than they were able to copy him, thus bringing his music to the forefront of Venice’s glittering landscape.