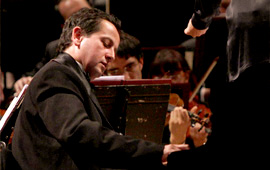 After having crossed the country with eight recitals and two orchestra concerts, pianist Horia Mihail will reach Bucharest with his national tour called The Travelling Piano, at the Radio Hall: on 12 June, at 19.00 in a solo recital and on 15 June, at 19.00 in a concert with the National Radio Orchestra conducted by Jin Wang. He will perform Rhapsody on a Theme of Paganini by Rachmaninoff. As a matter of fact, the programme of the recital is conceived on the theme of transcriptions, of variations on a given theme, of paraphrases, including works by Bach-Busoni, Schubert-Liszt, Rachmaninoff-Kriesler and not only.

The Travelling Piano, pianist Horia Mihail's second extraordinary tour, scheduled between 21 May and 30 June 2012, started with a first journey in Transylvania in Mediaş - the city where the Romanian Broadcasting Society brought a high-quality concert piano -, Dumbrăveni and Sighişoara, after which were programmed recitals in Braşov, Oradea, Baia Mare, Cluj Napoca and Piteşti and concerts with the orchestra in Tg. Mureş and Braşov.

The Travelling Piano tour will continue with recitals and concerts in other cities in Romania (to which will be added a postscript in Chişinău, on 11 July, at the Piano Nights International Festival). After the 15 June, pianist Horia Mihail will cross the country from North to South and from East to West, going from Iaşi to Caracal and from Mamaia to Sânnicolau Mare. The second travelling piano made available by Radio Romania will accompany him on the journey towards these cities and most especially to where there are no concert pianos that can facilitate organising such events.