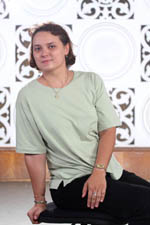 Following her academic studies at the University of Music Bucharest, completed in 1993, at the composition department (professor Ulpiu Vlad 's section), she was awarded various composition prizes and participated in creation workshops abroad.

She has been part of the Composers and Musicologists Union of Romania since 1994 and she has been a member of the International Society of Contemporary Music since 1995.

At present, she is programme producer at Radio Romania Music.

Journalistic activity at the radio:

Seven years of programme production, live and satellite broadcast of concerts at Radio Romania (1998 - 2004)
One year of making music and poetry performances for the Radio Romania Cultural radio station in the same period of time. Five years of making programmes, running commentaries of the day, and conducting interviews with Romanian or foreign artists (1996 - 2000)
Two months of a BBC course in journalism as part of an exchange between the Romanian and the British radio stations (Nov - Dec 1995)
Management courses with specialists from the Swiss radio station in the same time period Four years of variety show broadcasts for all the radio stations of Radio Romania (1994 - 1998).