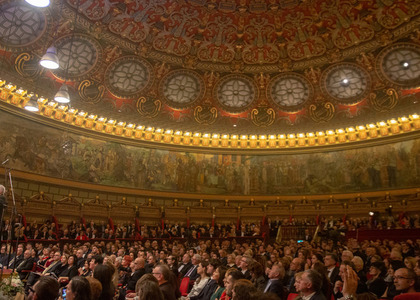 The 18th of January was a day of celebration this year - it marked the 30th anniversary of the return of the Royal Family to the country.Among the events dedicated to this anniversary, we can mention the double book launch from Cărturești Carusel on January 17, or the gala concert organized on Saturday at the Romanian Athenaeum. You will findmore about the significance of the second event, as well as impressions from the guests present in the following material.

It's been thirty years since the arrival of Her Majesty Margareta, the custodian of the Romanian Crown, and this event was celebrated on Saturday, January 18, 2020, with a gala concert at the Romanian Athenaeum. The event was held in the presence of Her Majesty Margareta, His Royal Highnesses Prince Radu, Princess Elena and Princess Sofia. Andrew Popper, Head of the Royal House, told us about the significance of this event:

"This concert marks the return to the country of the Royal Family, represented by the presence of Her Majesty Margareta, who first stepped on Romanian territory on this day, 30 years ago. At the time of her birth, she was not allowed to come in the country. As soon as this possibility appeared, she came here and with her, she managed to markthe return of the Royal Family to Romania and the beginning of very intense activities undertaken by the Royal Family. "

The anniversary concert was opened with a speech of Her Royal Highness, Princess Sofia, who talked about the importance of the return of the Royal Family to Romanian soil and about the role in supporting the country's reconstruction activities after 1989. A few memories about that time offered Danielle Maillefer, the organizer of the first Visit of Her Majesties Sale Margarita in the country:

"I didn't know how we were going to be received. I was a little scared, because we could have been arrested and whatever could result from that. We didn't know if we were going to be well received, with joy. The international press sensed the magnitude of the event more than the local press at that time. Then I calmed down, because I thought that at least because of the fact that they observed us, nothing could happen to us. Then we spent ten days here, I visited a lot of places and it was very exciting. "

One of the exciting moments of the evening was the interpretation of the Royal Anthem by Eduard Hübsch, by the Royal Comrade and the Royal Choir, under the baton of conductor Tiberiu Soare. In the same formula, the musicians presented two vocal-symphonic works dedicated to the coronation: Zadok the Priest by Georg Friedrich Handel and Land of Hope and Glory by Edward Elgar. Famous melodies were also included in the concert program, such as "Song to the moon" from Rusalka opera by Antonin Dvořak, performed by soprano Valentina Naforniță, Vissi d'arte from Tosca opera by Giacomo Puccini, with soprano Nelly Miricioiu, or the song Core'ngrato, performed by tenor Teodor Ilincăi. On the stage were also present as soloists the pianist Alexandra Dariescu and the violinist Remus Azoiței, who offered the audience, in interpretations whose word of distinction was the second and third parts of the Concert no. 21 for piano and orchestra by Wolfgang Amadeus Mozart and Introduction and Rondo Capriccioso by Camille Saint-Saëns.

After the concert, Ioan Luca Vlad, lawyer and member of the Royal Council, shared his impression about this event with us.

"The concert is an anniversary one, it marks 30 years since Her Majesty Margareta, the Custodian of the Crown, first came to Romania. At that time, the king was forbidden to come to the country, which is why she was , practically, the first representative of the Royal Family in Romania started his social and charitable activity. Now, at the age of 30, it is not only an anniversary, but also a thank you for those who were then, by her side, order to start again with the presence of the Royal Family in Romania. I found the repertoire fascinating. Personally, I liked Zadok the Priest and Land of Hope and Glory the most, because they are songs taken from the repertoire of coronations from the United Kingdom."