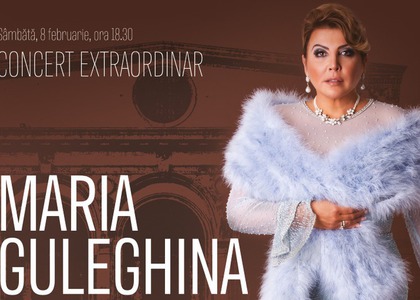 Soprano Maria Guleghina, invited to an Extraordinary Concert on the stage of the Bucharest National Opera House

On Saturday, the 8th of February 2020, from 6:30 p.m., the Bucharest National Opera House presents the Extraordinary Concert "Maria Guleghina". The conductor will be Alberto Veronesi, as a guest on the most important lyrical stage in the country.

Maria Guleghina is considered one of the most important dramatic sopranos in the world, the only one who has so far played titular roles in 16 productions at Teatro la Scala, including "ManonLescaut" and "Tosca" by Giacomo Puccini, "I Due Foscari", "Un Ballo din Maschera" and "Macbeth" by Giuseppe Verdi and so on.Since 1991 the soprano has had over 160 appearances at the Metropolitan Opera in New York in works such as "Aida", "Macbeth", "Nabucco" - Giuseppe Verdi, "Turandot" and "Tosca" by Giacomo Puccini, "Norma" by Vincenzo Bellini, "Adriana Lecouvreur" by Francesco Cilea, "Andrea Chénier" by Umberto Giordano, "The Queen of Spades" by PyotrIlyich Tchaikovsky, "CavalleriaRusticana" by Pietro Mascagni, "Sly" by Ermanno Wolf-Ferrari and so on. This "Queen of the Opera", widely acclaimed by the public, frequently performs on all major lyrical stages of the world, such as: Vienna State Opera, Mariinsky Theater, Bavaria State Opera, Berlin Opera, TeatroLiceu, Covent Garden, Opera Bastille, Teatro Colon, Bolshoi Theater and so on.

Soprano Maria Guleghinarecieved numerous awards and distinctions such as: the 2009 Puccini Award - for best performance in a Puccini role, Giovanni Zanatello Award for her debut at the Verona Arena, Maria Zamboni Gold Medal, 1999 Gold Medal at the Osaka Festival in 1999, the 2001 Bellini Prize, the Arte e Operositanelmondo de la Milano Prize, and so on.

Her recent repertoire includes recitals, tours and roles such as: Abigaille in Giuseppe Verdi's "Nabucco" at Deutsche Oper Berlin, Minnie in "La Fanciulla del West" and Giacomo Puccini's Tosca at Torre del Lago and Turandot at the Colon Theater in Buenos Aires, the Sofia Opera, the Mariinsky Theater, a major recital at Carnegie Hall in New York and a concert tour in Russia. Also worth mentioning is her recent debut of the Wagnerian repertoire, which was a success, Kundry's role in the opera "Parsifal", conducted Valery Gergiev at the Mariinsky Theater and Constantin Trinks at the National Opera in Sofia - for which she was highly acclaimed.

Future performances include: "Turandot" in Sofia and Bucharest, "Tosca", works by Giacomo Puccini, "La Forza Del Destino" by Giuseppe Verdi at the Mariinsky Theater, "Nabucco" by Giuseppe Verdi in Japan, and the debut in the role of Kostelnicka in "Jenufa" by LeošJanáček at Concertgebouw in Amsterdam.