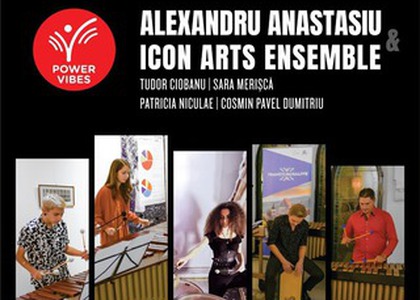 The Power Vibes National Tour started on January 15th with a concert in Bucharest, at the National Library. What was the motivation behind this series of concerts?

Celebrating 15 years of solo career, since I was a lead singer with an orchestra for the first time.This series of tours will begin with the ICon Arts Ensemble, made up of some very talented young people whom I had the pleasure of meeting - some of them, a few years ago, others, recently at the ICon Arts Summer Courses. It's a great joy for me to be able to share the stage with these young people. It is said that young people have no experience, but they have no way of having experience because they are not given a chance. And, from this perspective, I think it is very important for them to sing on stage as often as possible, all the more, together in a percussion ensemble, and I have the opportunity to help them in this regard.

How was this ensemble formed and what can you tell us about its members?

Let's take them one at a time ... it consists of Sara Merișcă, a young woman who won the Third Prize at her first international competition, in Italy. Next to her, there will also be Tudor Ciobanu, another young man who is very good at playing marimba and other percussion instruments; Cosmin Dumitriu, who is the team's cadet, in the eleventh grade at the "George Enescu" High School and Patricia Nicolae, who is in her first year at the Conservatory, and with whom I had the opportunity to collaborate at the orchestra, at the conducting master's degree that I'm attending at the National University of Music in Bucharest at the moment.

The public will be able to enjoy various works, from creations signed by Chick Corea or Emmanuel Sejourne, to opposites signed by you.

It is a dynamic, lively repertoire, a repertoire through which we practically want to positively change the condition of the people who come to the concert hall, at least for the moment.