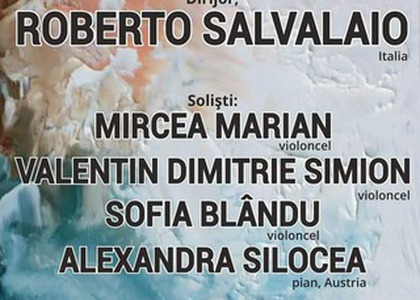 The first absoluteaudition was held at Bacău on World Radio Day, on 13th of February 2020

I was on Friday, on the Radio Day, an ad-hoc columnist at the "Mihail Jora" Philharmonic in Bacău. Why did I choose to spend my evening at the concert at the Băcăuan Athenaeum? Because Laura Ana Mânzat, our colleague, is a composer and her music has rang with the Piano Concerto No.2 by Dmitri Tostakovici and the Mozartian Suite by Piotr Ilici Tchaikovsky under the baton of master Roberto Salvalaio.

Laura Ana Mânzat, the composer -a contemporary artist. This could be the title of our dialogue, a dialogue carried on The World Radio Day, but with a radio journalist who has another hypostasis. You are a 21st century composer!

Laura Ana Mânzat: A composer with the training made in the 20th century and with first auditions in the 21st century.

Where do you feel you belong more?

Laura Ana Mânzat: In everything I learned from my two masters, Vasile Spătărelu and Ulpiu Vlad, who are very different as musical personalities and ... then I have created my personal path, my personal style, a style that I try to be as unitary as possible.

The concert signed by you, played in the first audition, was performed by three cellists, Mircea Marian, Valentin Dimitrie Simion and Sofia Blându. Is there a precedent in the musical literature of a concert for three violins?

Laura Ana Mânzat: There is not much ... I felt tonight that I have three children from an artistic and musical point of view. They inspired me first of all their performances and their artistic and technical possibilities that I have followed over the years. Mircea Marian, who plays the first cello, is a well-known performer already. He really wanted this concert. I came up with the idea simply by having a discussion with him in October, at the Days of Contemporary Music, right here, in Bacău.

You are co-creators tonight, because you are the first, you will remain practically in the history of interpretations of this score ...

Mircea Marian: We are very happy and honored to have been offered this opportunity to perform the concert for three cello and orchestra by Laura Mânzat, in the first audition, together with conductor Roberto Salvalaio and the Bacău Philharmonic Orchestra.

Laura Ana Mânzat: The second cello was Valentin Dimitrie Simion from the "George Enescu" National College of Music in Bucharest, with over 50 national and international awards; he also sang contemporary music. And the cello III, Sofia Blându, a student of Mircea Marian from the National College of Arts "Dinu Lipatti", very talented, and she with important prizes. I know them, I have followed their career and they have inspired me.

Valentin, this music that you and your other two partners will play now was born in the same house as you. And this is a premiere again. The songwriter has the chance for her son to play this score. How do you live this moment?

Valentin Dimitrie Simion: Obviously for me it is such an honor to sing a song that was born in a way under my eyes, written by my mother. I was present at the writing of each note. And now, for all those notes to come out of my hands and that of my colleagues is something extraordinary.

Sofia Blându: Mrs. Laura Mânzat allowed us to discover her principles but we also put a fingerprint on her. I had some very intense days of work, in which all three of us learned from each other and so I created, I hope, a successful result of this work.

If you were to put now, at the end of our dialogue, a name, a title for this concert for three cellists, what title would you give him? Because he thought it was very cinematic.

Laura Ana Mânzat: I have not yet decided and maybe it would be good for the title to come from the public.

So, for now, it's the untitled Laura Ana Mânzat Concert!