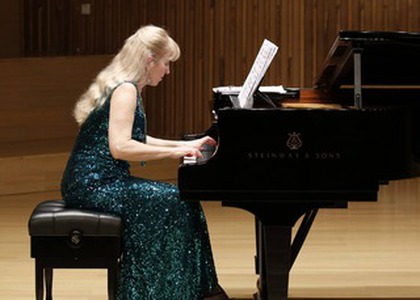 Today, October 12th 2020, the 7th edition of the George Enesco International Singing Competitionbegins in Paris. The event is organized with the support of the Society of Authors, Composers and Publishers of Music of France and the Romanian Cultural Institute, in partnership with the Russian Music Society of France, the "Sergei Rachmaninoff" Russian Conservatory of Paris and the "George Enescu"National Museum. The artistic direction is provided by pianist Alina Pavalache and composer Henri Nafilyan. We find out the details on the unfolding of the events of this edition from pianist Alina Pavalache.

You have reached the 7th edition of the George Enesco International Singing Competition. In a usual manner, the series of events includes a singing contest and various concerts. This year the pandemic affected all musical projects; what did you manage to organize and what did you have to give up?

Fortunately, we didn't have to give up much. The only thing we had to give up that was imposed was the fact that the final of the competition was not accompanied by a symphony orchestra (as how we launched the project in 2019) - for reasons of distancing on the stage, and the impossibility of inviting young instrument players, because in this project we have a partnership with the National Conservatory of Music in Paris; they are young instrument players in undergraduate or master's studies who form the special orchestra for the Enesco singing competition. Otherwise, we manage to hold the contest in its entirety, with the eliminatory stage on Tuesday, October 13th, the semi-final - Thursday, October 15th, and the final - Friday, October 16th for the "Professionals" section. The "Amateurs of Vocal Art" section will take place on the same day, Thursday, October 15th - both the eliminatory test and the final. Besides the contest, we managed to organize two concerts, not three, this year too - a vocal concert and a chamber music concert, violin and piano.

Given that it takes place live, what about the participation of candidates from other countries? Do we have representatives from Romania, too?

There is a representative from Romania, from the Conservatory of Cluj, with whom we are in touch; we also contacted the Romanian Consulate in Paris. There are no restrictions, so he will be able to come. There are two other Romanian candidates, as far as I know, but they come from other countries. For the moment, there are no restrictions in France for incoming citizens; all the distancing measures are taken, for the movement in the institutions where the contest takes place, at the "Sergei Rachmaninoff" Conservatory and the Bernanos Hall - they are new locations for this event, because the locations initially provided could not hold the event due to health concerns.

What is this year's jury comprised of?

The composition of the jury initially provided cannot take form, as the two guests from abroad - Mr. Tobias Truniger from the Opera Studio of Munich cannot travel, as is the case of Florin Estefan, the manager of the Cluj Opera who, due to quarantine reasons on his return, cannot travel either. But we hope that Florin Estefan can grant the award through a live online viewing.

What are the prizes of the competition and what artistic opportunities do the winners get?

The prizes of the contest are pretty important this year. The Grand Prix Opera has the 1st, 2nd and 3rd places; the "George Enesco" Grand Prix is granted by the Romanian Cultural Institute and there is also the Grand Prix Contemporary Prize - all of these worth 12.500 euros. We are in partnership, from the first edition, with the Adagio Artists agency, who promote a part of the artists who are awarded. Our joy is that out of the young artists who are awarded at the Enesco Competition - I could say that more than a half - are making a career of it. I would name soprano Sarah Defrise, soprano Jenifer Courcier, mezzo-soprano Antonia Cosmina Stancu, tenor George Vîrban, mezzo-soprano Martiniana Antonie... and I'll stop here.

Finally, tell us about the two scheduled concerts - a vocal one, which will take place today, and a chamber music one, which will be held on Wednesday. Who are the protagonists and what will they perform?