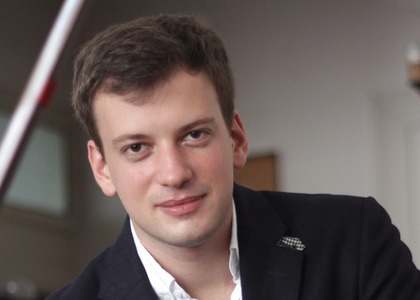 An Interview with Mihai Ritivoiu

The "George Enescu" Philharmonic Orchestra will be performing under the skilled baton of Christian Badea on Thursday, October 10th and Friday, October 11th. The concert program includes the Khovanshchina's Prelude by Modest Musorgski and the Symphony No. 8 in G major by Antonín Dvořák. Mihai Ritivoiu will be the lead performer in the Piano Concerto No. 1 in F minor, Op. 1 by Sergei Rachmaninoff. He is going to answer a couple of questions for us.

You will play the Piano Concerto No. 1 in F minor, Op. 1 by Sergei Rachmaninoff along with the "George Enescu" Philharmonic Orchestra. What made you choose this piece?

It is a piece that is perhaps more overlooked in the concert programs. It is not as well-known as the Concertos No. 2 and No. 3 by Rachmaninoff. It is indeed a piece composed by a young Rachmaninoff and has a sort of piano cascade at the beginning, which is already familiar from Schumann and Grieg's works. This may be regarded as conventional, however it absolutely has the burning passion of Rachmaninoff. It is a piece that draws you in. I very much enjoy practicing and playing it and I am glad that I can show it off to the public because it is not frequently displayed.

How would you describe the relationship between you and conductor Christian Badea, taking into account that is not the first time you share the stage?

It has been a pleasure. It went really smoothly, because we shared the same views regarding the concert, a Mozart event. It was absolutely a pleasure. He is a highly esteemed musician. I feel honoured andI am very glad to be, for the second time, part of a concert under his baton.

This year, in the month of May, you have been granted the "XXI Century" award at the international competition Citta di Cantu in Italy. Where do contemporary pieces stand in your repertoire?

I admit that, until recently, I haven't given much thought to contemporary pieces. Not on purpose, but I was simply too caught up on other pieces I was working on. However, I wanted to work more on this part of the repertoire and the time has finally come. At Cantu, I played the Valentin Gheorghiu Concerto. I am also working at the moment on a cello and piano Sonata by Valentin Gheorghiu and on some pieces by a British composer named Thomas Ades.

Last year, you released your album called Transcendence. Do you plan on releasing another record?

Yes, of course, but it is only in the pre-production stage. I will however reveal more details as the project develops.