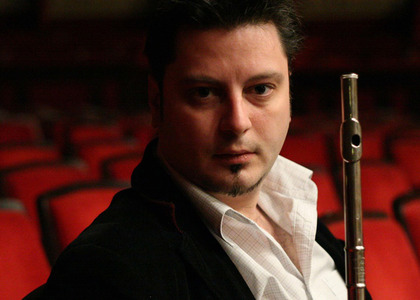 The pianist Mara Dobrescu and the flute player MateiIoachimescu return to Romania for three recitals, in Cluj-Napoca, Bistrița and Bucharest. Under the title of "Traversée du Fantasme", the two artists create yet again a fantastical world, with nocturnal scenery, with legends and mythical figures, with both old and new dances, or songs about times long gone. Regarding the dialogue with Mara Dobrescu, Matei Ioachimescu has declared:

For this series, our collaboration came somehow naturally, following our previous collaboration at the Romanian Rhapsody tour, a very successful tour, with a unique programme, with lots of concerts in the country. A few concerts abroad followed, in Slovakia, France, Austria and so on; it somehow follows this line of a valuable programme, both with classical works, but also, it puts into a certain universal context, works of some contemporary composers, in this case, young composers, contemporary Romanian composers.

This time, we continue the series with two commissioned pieces dedicated to us, to the Romanian public. Two young, very valuable composers from Cluj, AlexandruMorariu, and from Bucharest, Sabina Ulubeanu, two composers already known to the public in Romania. If AlexandruMorariu was the winner fo the composition contest during the Enescu Festival, an extremely prestigious contest, Sabina Ulubeanu recently had the premiere of a symphonic work of huge success during the Enescu Festival, therefore our tour has the advantage of the prestige of these two exceptional young composers; what makes their pieces have a great and long-awaited impact on the Romanian public is that they have perfectly understood the theme of this programme and from our point of view as interpreters I think they integrate well into this theme of a fantastical world of dream, where we play around with mythical figures and sad songs from Bela Bartok. We have a complex programme.

The focus this time has been on putting lesser known works, as I was saying, into a universal context, to give them an extraordinary emotional charge and to use works that are less accessible to the public in such a context and behold, that is how a very spectacular work from the Swiss composer Frank Martin, The Ballad by Frank Martin at the end of this recital, appears, through the music of Mendelssohn, Jean Sibelius, works of the French impressionism, small samples from different styles, which, as I was saying, serve this extraordinary theme.

In the end, our tour in Romania is composed of just three concerts. There were more concerts initially, but we kept only the three - as part of the prestigious festival "Musical Autumn of Cluj (Toamna muzicală clujeană)", we started from there, from the invitation by this extraordinary festival, near Cluj, just a stone's throw from Cluj, in Bistrița, where some wonderful things are taking place at the synagogue on Tuesday, too ( October 22nd 2019); we conclude this Romanian journey at the Cotroceni National Museum, in an extraordinary ambiance, places are already full, sold out. This is a great joy, to be able to present classical music and contemporary classical music, in such a beautiful setting.

First of all, it is a privilege for those present to be witnesses to the creation of the moment. It is a fantastic thing to be able to sit in the room alongside the two composers present at our concerts, at all three of them. An extraordinary thing, that music lovers from Romania, get the chance to witness this creation process and listen for the first time to these wonderful works. Besides, there will be a cohesive programme during the whole evening, a programme which will carry them on the wings of dreaming to fantastical lands. I consider it a programme that is most welcomed in our times, which are hard enough.

The "Traversée du Fantasme" tour held by the flute player Matei Ioachimescu and pianist Mara Dobrescu will begin Saturday, 19 October 2019, with a recital at the Synagogue in Bistrița, scheduled for 19:00.