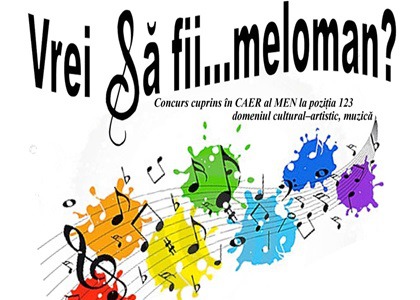 Why do we love music?

In the period from the 1st to the 3rd of November, 2019, in Arad, took place the 5th edition of the "Do you want to be a ... melomaniac" Regional Contest, conducted by professor Georgiana Maria from the "Adam Müller Guttenbrunn" Arad Theoretical Lyceum, and professor Victor Maria from the "Sabin Drăgoi" Arad School of Arts. The contest had an organisational sponsorship by the Arad County School Inspectorate, Arad Municipal Cultural Center, and Radio Romania Music.

The contest, included in the Regional Educational Activities Calendar of the Ministry of Education, attracted many participants from Arad County, as well as from Bacău, Bihor, Cluj, Timiș, Vrancea counties, and the city of Bucharest, which, regarding by their attendance at the context, had shown appreciation and intention of coming back to the next edition.

The contest tool place at the festive hall of the "Sabin Drăgoi" School of Arts. In the first day, the participants, pupils, and professors participated in an interactive workshop, then, they listened a concert at Arad Philharmonic. In the second day, after a welcoming remark made by the organizers, and the inspector for the educational activities, professor Camelia Moler, the contest started, divided in sections like: "Listening Together!" (in teams), "Young Melomaniacs" and "I'm the Most Passionate" (individually), and "Music and PC" - a direct participation (by means of PowerPoint presentations and films), followed by the jury deliberation and the offerings of awards by section. Further, the participants, the guiding teachers, and volunteers from the organizing team, offered to other participants a surprise-evening - a recreational activity, during which the participants socialized, exchanged impressions, and made friendship ties.

The five section of the contest had reunited, by direct participation or at distance (in the case of fine arts and literary creation sections), 280 pupils, and 46 guiding teachers from 25 schools of the seven counties: Arad, Bacău, Bihor, Cluj, Timiș, Vrancea, and the city of Bucharest.

The contestants had displayed their musical knowledge in a series of tests, in which besides the knowledge, also mattered the reaction speed and the teamwork. Also, they had the chance to express themselves in written form, paintings, or by digital means, making extraordinary works on musical themes. The musical auditions of the contestants were offered by Radio România Muzical, through the "Listening to 5 Minutes of Classical Music" project.

The jury consisted of Mesdames inspectors, professors Camelia Moler and Andrada Marcu, on behalf of the Arad County School Inspectorate, professors Carmen Șuteu, Maria Nicoleta Brola, Victor Maria, and Anda Tămaș from the "Sabin Drăgoi" School of Arts, professors Diana Simonca and Camelia Circa-Chirilă, from the "Moise Nicoară" National College, and professors Lavinia Chiș, Cristina Busu, and Simona Stoica from the "Adam Müller Guttenbrunn" Theoretical Lyceum. Along the prizes and mentions granted by jury, Radio România Muzical granted special prizes for the best contestants for musical auditions, and the Arad State Philharmonic granted a special prize for the best performer of the contest, which lies in the possibility of performing in an educational concert for pupils, on the stage of Philharmonic.

During the contest, the fourth issue of the "Trepte spre muzică" magazine had appeared, the editorial team being formed by the pupils of the "Adam Müller Guttenbrunn" Theoretical Lyceum, coordinated by professor Cristina Hanț.

Now, at the end of the 5th edition of the "Do you want to be a ... melomaniac" Contest, we can firmly affirm that there are more and more young music enthusiasts (more than 250, it's an impressive number, isn't it?) ... This manifestation is, first of all, a gathering of musical lovers from non-vocational schools, in other words, it's a gathering of those, who, beside homework and school activities, find time for the love of music. The theme of this edition - "Why do we love music? - The Musical Romanticism" - meant the expansion of horizons into the knowledge of the most beloved period in the history of music. This was demonstrated by the young participants, through the dedication with which they had prepared and competed in this project.

We are thankful to everyone who got involved in this project: our partners, the organizing team, participants, and guiding teachers. Let's see each other swimmingly, on the next edition, at the beginning of November, 2020.