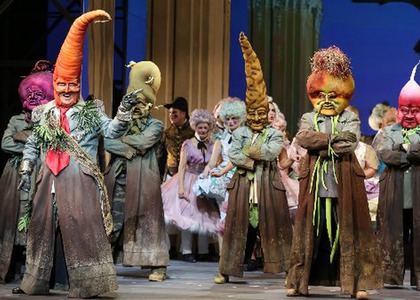 Vienna. December 2019. King Carrot. An Offenbach end of the year at Volksoper

In 2019 the music world celebrated the 200th anniversary of the birth of composer Rossini called "il piccolo Mozart degli Champs-Élysées" / "little Mozart of the Champs-Élysées". I don't recall a work, written by the father of the operetta, which was played entirely in the last decades on Romanian stages. Of course, the contemporary Romanian music lover knows The Tales of Hoffmann opera well - even if this title is not included in the repertoires of our theaters - he remembers something about the La belle Hélène or about M. Choufleuri operas performed sometime, a long time ago, at the Bucharest Opera, or about Douchesse de Géroldstein performed at the Grand Theater in Geneva, the show that was given a lot of attention last year, as mezzo-soprano Ruxandra Donose brought to life the main character. I must not forget the show " made from pieces" The Tales of Offenbach, which is performed on the stage of the National Opera and the "Ion Dacian" Musical Theater in Bucharest and from which the director Constanța Campeanu gathered some of the most famous pages - arias, duets, terzettos... - chosen from the operettas of the French composer. And that's it! At the international level, however, there were lyrical theaters that staged Offenbach's operettas, in versions that will become points of reference; cheerful, brilliant performances, with great performances of artistic force on stage, as it is appropriate for a production of grande operette. These include, of course, the production with König Karotte / King Carrot from Volksoper in Vienna.

The premiere back in 1872 in Paris was a huge success. Over the next six months, King Carrot by Jacques Offenbach had been played 193 times in the City of Lights and had been staged in London and Vienna. Then ... almost 150 years of silence and forgetfulness followed! Why? Due to the huge dimensions of the show - in the original version, it lasts for almost six hours, uses 1500 costumes and the action requires difficult decoration changes. And here, today, the Vienna Volksoper, in collaboration with the Hannover State Opera, brings to life Offenbach's script, this original opera-bouffe-féerie reduced to three hours of performance, in which 25 soloists perform, many of them in multiple roles and there are approx. 100 choristers and ballerinas.

Our readers are not, of course, familiar with this work. So, I'll give a brief summary of it.

Act I. Prince Fridolin XXIV of Krokodyne, is a young, shallow, superficial young man and a big spender. In order to save the country's treasure, he plans to marry Princess Kunigunde from the neighboring kingdom, Krackhausen. A good spirit has other plans, he wants Fridolin to come round and become a wise and visionary monarch. Under the name Robin and with the appearance of a student who's always helpful, he appears alongside the prince.

Kunigunde is an "emancipated" princess - she has in her purse, among other things, the latest model of mobile phone - trained at the Paris school and knowledgeable in the conquest and manipulation of men. Fridolin is subjugated by the princess's charms and happy to be her husband.

In the tower of a palace, the witch Kalebasse hides a prisoner, Rosée-du-Soir, a young high-class girl, who is in love with Fridolin even if she does not know the prince and has seen him only a few times from the window. The sorceress Kalebasse wants to destroy Fridolin in order to take revenge on his father, who took her powers away for ten years for illegal practices. There is another day until the punishment is over, and the witch is determined to take Fridolin down from the throne of the kingdom. She even has a replacement ready. But Robin knew her plan. He appears and, with the help of a magic wool ball, frees Rosée-du-Soir.

The sorceress Kalebasse brings to life the vegetables in the palace garden. Her plan is to replace Fridolin with King Carrot.

In the palace, Kunigunde is looking forward to Fridolin's and the entire court's arrival. However, the ceremony is disturbed by the appearance of vegetables. Kalebasse, who regained her powers, puts spells on all of them. Fridolin is banished, King Carrot is put on the throne and the court swears allegiance to him. Even the beautiful Kunigunde would agree to accept King Carrot as a husband. Fridolin is forced to flee and only the Court Wizard, Truck, and the good spirit, Robin, follow him.

Act II. Dressed as a squire, the beautiful Rosée-du-Soir joins Fridolin's group of companions. Then along comes the head of the police, Pipertrunck, a clever opportunist who understood that the balance of power would soon tilt again in favor of Fridolin. The prince and his friends are led by Robin to the sorceress's residence, Quiribibi. He knows a means by which Kalebasse can be defeated: Solomon's ring, which, after the conquest of Jerusalem, is in the possession of a Roman soldier from Pompeii. In order to provide this valuable information, Quiribibi asked to be ... dismembered and all parts of his body to be, in a row, thrown into a huge stove and burnt. Only then, the old wizard can be reborn and, with the force of youth, again take advantage of all the joys of life.

With the help of a magic lamp, Fridolin and his friends arrive, flying back in time, in the city of Pompei in 79 AD. They have some difficulties in finding the sought-after ring which, over time, has changed owners. They manage to get it by talking to the Pompeians about… the discovery of the railway and the fast trains. Just seconds before Vesuvius, the killer volcano erupts, the small group manages to disappear.

Act III. At the court, King Carrot is admired by all the ladies but he is much more interested in the jam jars. Traders arrive at the palace bringing expensive goods from the Far East. They are actually Robin, Rosée, and Pipertrunck in disguise. There's also Fridolin around. He meets Kunigunde and, naively and still in love, reveals to the former fiancée the strength of the ring he is wearing on his finger and which will help him to return to the throne. But Kunigunde deceives him, steals his ring and calls the witch Kalebasse. Robin saves everyone, causing them to disappear.

Together with Rosée, Robin arrives in a forest. Here, the young girl receives a four-leaf clover, a magical but dangerous weapon. Three times, she will be able to ask for a wish to be fulfilled. And a fourth wish will be fulfilled but she will have to pay for it with her own life.

Act IV. The third leaf of the four-leaf clover is used by Rosée to save herself and her friends from a wreck. They get to the monkey island. That's what Robin wanted, so he could take a monkey with them, a monkey which would be of great help in his plan to bring Fridolin back to the throne.

At the palace, vegetables are not doing very well. They are drying and breaking. King Carrot looks pitiful. Outside, the people are agitated, unhappy with the way the kingdom is run. The Wizard Truck uses a spellbinding powder, which he throws at people and they are all ready to revolt. Fridolin, Robin, Rosée and Truck stir the spirits. Under pressure from the crowd, the cabinet ministers give in and soon everyone heads to the palace in a threatening march.

In the vegetable garden, the sorceress Kalebasse is trying to bring the crowning King Carrot to life. No human hand can touch it, she says. The witch managed to get Rosée back in her power. The enchanted clover has only one leaf. Rosée is ready to sacrifice and asks for Fridolin to be saved and restored to the throne. But the spell is only fulfilled if the leaf is broken, but the agile monkey taken by Robin intervenes and breaks it. So no hand of man broke the last enchanted leaf but a monkey's paw! They are all saved. Vegetables, led by King Carrot, disappear. In the ovation of the crowd, Fridolin, now of course wiser after the adventures, occurrences and experiences he has experienced, is put back on the throne and Rosée becomes his wife.

The reader can now imagine the huge challenge the staging of such a show entails. Rich palaces, princes and princesses, wild vegetables, evil wizards and good spirits, travelling in time and space - the city of Pompeii, the anthill, agile monkeys, encircled waters, deep and thick forests... On the Volksoper stage, two artists tested their talent and imagination to meet all the requirements of the story. They are director Matthias Davids and stage designer and projection specialist Mathias Fischer-Dieskau, one of the two sons of the famous singer Dietrich Fischer-Dieskau. In their vision, the show has an alert, almost filmic, fast-changing atmosphere and decor. The crowd of choristers, dancers and figurants drifts in an impressive continuous movement. The courtiers turn into Romans, inhabitants of Pompeii, into ants and again into courtiers. The soloists are always on the move, ensuring the cohesion of the whole. They are all very good singers and very good actors. Suits, opulent or poor, as the case may be, complete and give color to the stage. The absurd situations cause laughter; the scene in which the live vegetables "grow" from the ground and begin to move among the people or the entrance of the ant leader, with the famous O ja ho ho call of Richard Wagner's valkyries. From the first chords tuned by the orchestra, you feel your lips involuntarily curl into a smile. From Offenbach's music, from the first to the last note, the extraordinary joie de vivre, which ensured his survival and identification with French spirituality. The excellent orchestra of the theater was firmly and lively led by the confident and inspired conductor Guido Mancusi. Each character has been flawlessly interpreted by versatile and humorous singer-actors. Of these, Christian Graf stands out in a very promising role of travesty, that of the witch Kalebasse. Fridolin / Carsten Süss advances on the stage convincingly, from the foolish prince to the strong and wise man, ready to lead his kingdom; Robin / Manuela Leonhartsberger is a springy spirit who can handle and solve all the problems; Rosée-du-Soir / Elisabeth Schwartz is fragile and delicate like the flower whose name it bears; Princess Kunigunde / Anja-Nina Bahrmann is naughty, fake, sexy, and cunning like a little girl of today; King Carrot / Sebastian Reinthaller is heavy and bushy as a dirty vegetable, barely removed from the ground and so are all the vegetables that accompany him; Pipertrunck, the police chief / Marco Di Sapia is agile as a feline, elegant and French in both movement and expression through lively expression and Truck, black magic master / Yasushi Hirano is decorative and Japanese, both in appearance and speech. Excellent performance at Volksoper in Vienna! A mixture of talent and imagination, parody and poetry, cabaret and magazine elements, opera and operetta, funny dialogue with political substrate, which the viewer can taste and easily identify in today's life beyond the walls of the theater... King Carrot, of which Offenbach composed the music using the text written by the famous Victorian Sardou, is a parody of the human condition. Large groups can be easily blinded and manipulated; they can even be persuaded to choose a carrot as their leader and to cast out a prince. Because, in front of the people, the man who shouts louder and is more aggressive, can always impose himself easier. And there is only one step to dictatorship from here. That was 200 years ago, in the time of Jacques Offenbach (1819-1880), and so it is today. That shiny wrapper in which the message is packaged, the contagious laughter and the feeling of well-being brought about by the combination of text and music make this truth much easier to bear sometimes.

A co-production of the State Opera in Hannover and Volksoper Vienna.