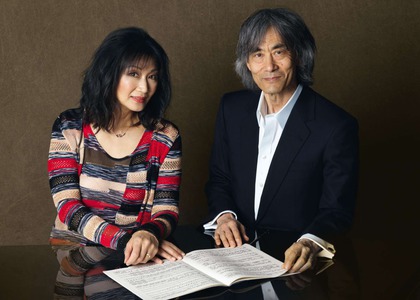 The subject is well made use of, well placed into the spotlight with the appearance of this amazing recording technology, each generation thus certainly having its heroes embedded into the collective memory of music lovers. And I will only mention a few names - Wilhelm Kempff, Claudio Arrau, Emil Gilels, Alfred Brendel, Maurizio Pollini, Murray Perahia, more recently, Maria Joao Pires, Leif Ove Andsnes, Pierre Laurent Aimard. With all this history, that as you can notice, does not slow down, we announce new record being launched on the same topic. In other words, I reckon these five Ludwing van Beethoven concerts will always find strong followers among artists and audiences alike.

Therefore, we will embark on a new adventure that brings two leading actors from Japan on the unbreakable foundation of the Deutsches Symphonie-Orchester Berlin - they are piano player Mari Kodama and (American) conductor Kent Nagano, together on stage, as well as in their everyday life. Less than a couple of months prior, on October 11th, they launched this integral of Ludwig van Beethoven's Concertos for piano and orchestra, recorded since 2006 until May this year, when to the five Concertos the one without a number was added, that sets this integral apart from the others.

An E major concert outlined by Beethoven at the age of 13, 14 - a sort of music yet to be accepted amongst the canon of Beethoven's creations, as we find out from the presentation of the record. Kent Nagano and Mari Kodama offer this Concerto no. 0, after intense musical studies. The manuscript is kept in the Berlin State Library includes, besides the piano sheet music, only insignificant annotations related to the orchestration for the first two parts in the manner - what instrument should be played during one passage or the other. The orchestral score of the Concerto was created at the beginning of the XXth century based on these notes - we are not told by whom.

On the other hand, the piano player and the conductor declare: "Armed with what we know today of young Beethoven, we would perform this concert differently at some points". So, we are listening to a personal version of the two, adapted during the repetitions with the orchestra and during the recording sessions. They set their minds to highlight "the exuberant freshness and that special sense of Beethoven the child that precedes the later creativity burst, the joie de vivre, sentiment, the vital energy in a style that owes this playful spirit to Haydn and Mozart" in this version. A premiere on Musical Romania Radio - this no. 0 Concerto in E flat major for piano and orchestra, the first attempt of teenager Beethoven in this area that will make him well-known later. It is the tribute that Kent Nagano and Mari Kodama bring to this huge musical personality of Viennese classicism. And because in 2020, 250 years since the birth of Beethoven are celebrated, in order to mark this anniversary, they wanted to add something new, which is not familiar to everyone, they wanted to show the beginning of this amazing adventure that will change the European musical profile. "You recognize the musical genre, and at the same time you recognize the evolution of European music, because Beethoven undoubtedly was its pioneer", conductor Kent Nagano admits.

The first compact disc of this integral presents a Rondo written 10 years after Concerto no. 0, in 1973, with the intent of it being the final part of Concerto no. 2 in B flat major as a comparison. But another Rondo was chosen for the 1795 version. This Rondo already shows us a fully developed composer, that this time signs the orchestration fully aware. The work has been included in this first album that closes off with Variations and the "Eroica" Fugue op. 35 in E soft major, precisely to capture the German composer's evolution from adolescence to maturity.

Until now I have not spoken of interpretations, considering the fact that this new integral started in an original manner and that the works were unique, therefore requiring additional explanations. But I have to say, Mari Kodama has studied all of Beethoven's Concertos for the piano and orchestra together with Alfred Brendel, her mentor, during these courses conductor Kent Nagano also being present, who also remembered the Austrian piano player's indications regarding the interventions of the orchestra. Therefore, we are taking of a continuation, an internalization of a tradition renowned for its authenticity, and of an artistic endeavour executed with elegance and with a flawless professionalism. We find the entire registry that we expect in this repertoire, the clarity and delicacy of the details, an impeccable technique, energy, nuances and phrasings of great refinement and an obvious passion for this musical universe.

Mari Kodama, a name that we recognise amongst the most valuable piano players of our time, according to certain columnists, a new authority in regards to Beethoven's repertoire. Word already has it that Mari Kodama brings a valuable experience to this register. She recorded the integral of Beethoven's Sonatas for piano during a 2014 project. And she has this quality of imposing herself, critics say. Of course that in regards to the Concertos, it is difficult to set a new standard, taking this repertoire's history and attractiveness. It depends on what you desire - the profoundness of a Pollini remains unique, unachievable, for a poetic character, the landmark can be Radu Lupu, the rediscovery of new senses - Pierre Laurent Aimard together with Nikolaus Harnoncurt, objectivity and stylistic accuracy - Alfred Brendel.

Perhaps at the end of this evening we will also discover the attributes that set Mari Kodama apart - for now, we intuit a well-argued stylistic layout, that finesse peculiar to the Japanese spirit, in a version with still clearly Mozartian shades for the Concerto No.2 op. 19 in B flat major for now. Extremely subtle and refined - the Adagio - part II of the concert. We also take notice of the monolithic, warm sonority, with beautifully rounded arches of the Deutsches Symphonie-Orchester Berlin, whose main conductor between 2000 and 2006 was Kent Nagano. And this recording was done in 2006. It is only the first part of an integral launched on October 11th, 2019, under the Berlin Klassics signature, included in the Records of the Year 2019 project by Musical Romania Radio.