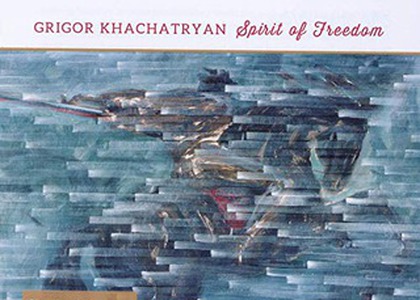 We meet a new-generation pianist and composer who released his first compact disc in this dual quality last fall. His name is Grigor Khachatryan, he was born in Armenia in Yerevan, studied piano and because the performances were real, he decided at the age of 15 that it was time to continue his studies in the United States. So today, we are talking about a world-class pianist, formed at the Jacobs School of Music at the University of Indiana, where he worked with Luba Edline-Dubinsky, then he continued his improvement on the coordinates of the Russian school of interpretation; he also got a Ph.D. in Pianistic Interpretation, Musical Theory, and Composition, becoming an assistant professor at Concordia College, Moorhead. He has a huge repertoire, made his debut in 2014 at Carnegie Hall in New York, and has already toured the United States and last year in China.

These are the main facts of the pianist who has been interested in songwriting since childhood. An inner voice told him he had to compose, as he himself says it in an interview.

The two Piano Sonatas that make up the summary of the album "Spirit of freedom" which were released on November 1st , 2019 under the Albany Records logo and have the opposing numbers 1 and 2, thus they are not the first compositions signed Grigor Khachatryan, because he sustains that only the former deserve this numbering. We take a look at sonata opus 2 called "Battle of Avarayr", a programmatic work undoubtely presented in the first audition in February 2019 at Concordia College which it also appeared shortly after that on the disc. The first words of the artist in the album's presentation before the audition are impressive: "born and raised in post-Soviet Armenia I was taught that a life without freedom has no meaning".

Grigor Khachatryan is undoubtely a talented pianist and a deep composer. From the first chords you may think Beethoven has reappeared in modern clothes as allure, but it's just a first impression. The speech is emerging in modern acceptance, following the suggested epic idea of the title evoking a 5th-century historical episode, when, in order to preserve its religious freedom, the slightly large armenian army opposed the huge army of the Sasanid Empire. When Armenia became a province of this empire in A.D. 449, it was forced to abandon her Christian faith and embrace the zoroastrianism. This battle of Avarayr, partly won with huge sacrifices, including that of the leader of the army, it precisely gives the Armenians the freedom to keep their religion and identity intact.

Let's come back to music. The fact is that the author follows and updates the classic patterns, and we find out this with obvious satisfaction. Nowadays, it can still be written a valuable piano sonata, whether classical or romantic and moving forward in search of its language, following a centuries-old tradition. There is neither minimalist gesture in the script nor avant-garde, no twelve-tone, no pointilist style or jazzed up with the sonorities of the latest electrical instruments. Musical ideas appear gradually as there is no terror of synthesized expressions. Grigor Khachatryan can afford the luxury of expressing himself in broad, generous phrases, leisurely, because he has the suitable means. There are even traditional Armenian elements, being elegantly integrated into the speech. In the first part, it modulates continuously, but preserves the tonal frame, the scenes follow one another cinematically; the second part conquers through lyricism and sincerity, the third one is a funeral march, while the last part brings this beneficial feeling of victory and gratitude of those capable of sacrifice.

It's nice that the Sonata's message can be received without prior documentation -that's one of the conditions for understanding contemporary music. While listening to this Sonata you wonder when, how and why the battle of Avarayr took place and thus discover an impressive page from the long-tried history of Armenia.