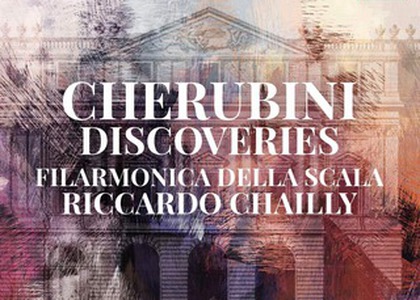 A record with works written at the beginning of the 19th century, some of which were also recorded for the world premiere, composed by Luigi Cherubini, on theCherubini discoveries album signed by the Scala Theatre Orchestra of Milan, conducted by Riccardo Chailly. The album has been released just a few days ago, Friday, February 7th, at the Decca house.

If we look at the discography of Riccardo Chailly, the Italian maestro who runs the Scala Theatre in Milan today, we encounter other titles entitledDiscoveries - Mendelssohn and Verdi. And now, here, Cherubini - on this record we come across 9 works recorded in world premiere.

All these 9 works are a series of small marches composed by Luigi Cherubini between 1800-1814, in various instrumental formulas - from symphony orchestra, to smaller chamber ensembles, some of them made up only of blowing instruments.

Luigi Cherubini, born in 1760 in Florence, died in 1842 in Paris; in fact, although Italian, he is very much related to the cultural life of France, on which he placed an important mark. Cherubini first visited Paris in 1785, settling herea year later; In 1789 he became musical director of the opera company founded by his compatriot, Viotti. In 1795, Cherubini was named one of the five inspectors of the Paris Music Institute, that later became the famous Conservator and where he would be appointed director in 1822. Cherubini's most influential composer and music teacher in France during the early 19th century would be named Commander of the Legion of Honourin 1841, the first musicianin the history of France to receive this distinction.

In 1816, Luigi Cherubini was appointed superintendent of the royal chapel, for which he composeda funeral March in 1820, one of his most famous works, most probably for the funeral of Duke du Berry, the nephew of the King of France, Louis XVIII. A work that also appears on this record.

The most consistent work on this album remains the Symphony in B major, the only genre work composed by Luigi Cherubini and one of the very few symphonies in theearly 19th century Italian repertoire. Much of Cherubini's work is dedicated to lyrical theatre, only this symphony and overture in the major E, which can also be heard on this record, are the only larger orchestral works from Cherubini's creation that have no connection to the lyrical theatre.

Cherubini composed his symphony in 1815, during a visit to London. Here we find an interesting mix between the Italian and the German writing at the time; Cherubini does not intend to imitate neither Haydn nor Beethoven, but, using the classical forms, proposes a discourse in which we recognize the Italian melodic inventiveness.

Beethoven said that the only one of his contemporaries who could equal him is Luigi Cherubini, and today, almost 200 years after Cherubini's disappearance, we realize that there may be truth to this statement. Especially if Cherubini's works enjoy a revealing performance, such as the Scala Theatre Orchestra in Milan, under the baton of the inspired Riccardo Chailly. The speech is clearly constructed, clear and logical; there is that transparency of the chamber type that delights the classicism, which shows us the simplicity, but not the scarcity of this music. To gracefully play classical music is the privilege of the great musicians solely - such as those at the Scala Theatre Orchestra in Milan, conducted by a maestro, Riccardo Chailly.