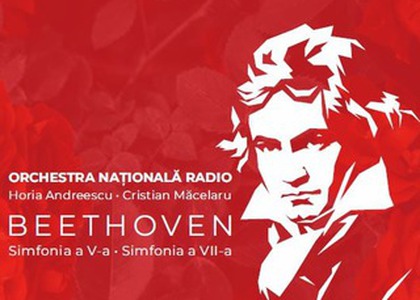 For the first time on Radio Romania Muzical, an album appeared at the Radio House Publishers in November 2020 to mark the anniversary of composer Ludwig van Beethoven. This year, the worlds prestigious record labels have exceeded in discographic achievements dedicated to the music of the great German creator whose 250th birthday is today. The Radio House Publishers has also released a remarkable Beethoven album, within the Radio Romnia Muzical collection, a CD with live recordings of the Radio National Orchestra. As Anca Ioana Andriescu, who wrote the presentation text for the albums booklet suggested, approaching the powerful Beethoven scores is always a challenge for the performer because, apart from the requirements of the musical text, apart from the complexity of the dramatic structure of that particular work, he also faces the myriad of famous versions recorded over the decades, but also the audiences expectations, to which the sonorities are apparently so familiar. However, Beethovens masterpieces still remain a great temptation for the artists of every generation. The Radio House Publishers is offering, through this CD, two Beethoven symphony depictions, conducted by Romanian musicians in different stages of their careers, Horia Andreescu and Cristian Mcelaru. That intensive experience of the direct communication with the audience can be felt in these live recordings of the Radio National Orchestras seasons. The first piece from the previously mentioned album is Symphony no. 5 Op. 67 in C minor by Ludwig van Beethoven, a concert recording realized at the Radio Hall in 2008, under the baton of Horia Andreescu, one of the most distinguished Romanian conductors, who has had a huge contribution to the enrichment of the Romanian musical life over time. He also conducted, as a permanent guest conductor, ensembles from Berlin, Schwerin and Dresda. In Romania he worked as main conductor of the George Enescu Philharmonic, founder and conductor of the Virtuozii Chamber Orchestra from Bucharest, and as artistic director of the Radio Orchestras and Choirs.

Horia Andreescu, in an interview he gave with the occasion of his recent record release:

Maestro Horia Andreescu, the Radio House Publishers has released a new disk with a recording of yours at the desk of the Radio National Orchestra, an album with Beethoven symphony music, this year when the entire world is celebrating the great composer, on his 250th anniversary. How do you relate to Beethovens personality and music?

He is, perhaps, my favourite composer, though there are also other composers that I prefer - Brahms, Wagner, Mozart, Haydn. Beethoven still remains a reference for every musician, a reference that is hard to achieve in the sense that Beethoven has his specific articulations, his specific extensions, his semantic features and his specific musical structure, which we, the musicians, should understand and reproduce.

My colleagues from the Radio House surprised me quite pleasantly, telling me that they are releasing this compact disk with Symphony no. 5, which they took from the Golden Sound Archive. I know that I have conducted Symphony no. 5 before, in the RadioRo Festival, at the Radio Hall, and one day I will come to listen to the two versions in order to see to what extent there has been a difference between the concert recording and the festival recording. What made me really happy was the fact that, besides the small imperfections of a live performance, my fellow musicians in the orchestra played with determination, communicated, and sang with understanding. There is always that moment when one wants to reach other notes, other nuances, slight changes in meaning that customize the interpretations of a symphony from one conductor to another. Therefore, I am grateful to the Radio and to my former colleagues from the Radio House and I hope to meet them on the coordinates of the recordings.

The 5th Symphony is probably one of Beethovens most analyzed and most played creations. How would you characterize this symphony?

It is probably the most played symphony. The 9th is also among the most played ones, but things are more complicated there with regard to organization. Each of Beetovens symphonies is different. I feel particularly attracted to Symphony no. 3. Symphony no. 3 is the first symphony in which Beethoven shows enormous courage, he changes a lot, starting with the two chords in the beginning of the symphony.. those two chords, those two measures there he concentrates the preludes of the first two symphonies or those of the symphonies of his predecessors - Mozart, Haydn. He brings plenty of new elements, he has, in this third symphony, a courage that he wont reach in the others, which does not mean that each symphony - with great mastery, with the singularity that differentiates it from the previous ones - brings in turn, besides that thing that is specific to Beethoven, another atmosphere, another general state. It also brings problems that the performer, the conductor must understand and overcome, and together with the colleagues from the orchestra must realize the complex called a Beethoven symphony.

Was there an integral of Beethoven symphonies conducted by you at the Radio Hall?

There was not or maybe it was. But my intention was to record the Beethoven symphonies. It would have been more complicated with Symphony no. 9, but I havent got there yet. There is a version which Im not ashamed to call a successful recording - Symphony no. 7, a special one. There is also Symphony no. 1, but that has to be retaken. I havent managed to record the rest of the symphonies as I would like to, and as the Radio would deserve to have at this hour, in the way we managed to do the Enescu integral thirty years ago. It would have been a business card that we deserved to have together, the orchestra and I.

The second symphony on the disk appeared in November 2020, it is the 7th, Op. 92 in A major from Ludwig van Beethovens creation, a concert recording realized in 2015, under the baton of Cristian Mcelaru. The best internationally ranked conductor of the last years, with a career in full bloom, Cristian Mcelaru is musical director of the France National Orchestra and he leads, as main conductor, the WDR Symphony Orchestra Cologne and the Romanian Chamber Orchestra. In the last years, after he began his activity as an assistant conductor of the Philadelphia Symphony Orchestra, he also contributed to the success of other ensembles from USA and Europe, such as the Amsterdam Concertgebouw Royal Orchestra, the Chicago Symphony Orchestra, the New York and Berlin Philharmonics. Since 2012 he has had a beautiful collaboration with the Radio National Orchestra, giving the sound of this prestigious ensemble more vigour, novelty and elegance, as you will be able to notice in the following recording, Symphony no. 7 by Beethoven.

Conductor Cristian Mcelaru, speaking about the monumental creation of the German composer:

In Symphony no. 7 by Beethoven Im always discovering some sort of joy that I cant find in his other symphonies. For me, Symphony no. 7 actually begins with a question he asked in Symphony no. 3. Why? If you remember, in Symphony no. 3 the composer made a statement against Napoleon who became emperor. And in Symphony no. 7 we find the end of this story, because Beethoven, after finishing it, preserved it and didnt allow it to be played until he found the right moment. Quite a long time has passed, nearly two years since he finished the composition, until he allowed it to be played. And this was the moment when Beethoven made another statement. He gave all the money he received in this concert to the families of the soldiers that were wounded in the first battle won against Napoleon. It is an important work not only because it is so musically beautiful. It is so vivacious, full of dance, but for me it is also an important work because Beethoven makes this statement saying that we as artists, we as interpreters of classical music must represent the society were living in and which we are part of.