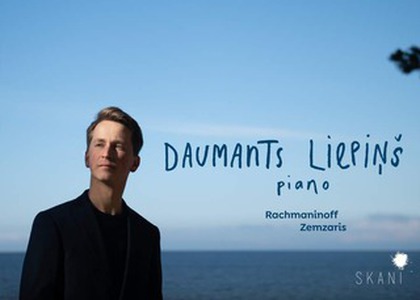 The Latvian pianist Daumants Liepins released his debut record on November 20th, 2020 at the Latvian Skani record label. On this record: Etude Tableau Op. 39 and Sonata no. 2 by Sergei Rachmaninoff, along with a world premiere recording of Sonata no. 3 by Imants Zemsaris.

The British Pianist magazine published in December 2019 a list of four pianists that deserve to be followed in 2020. At the top of the list is the Latvian Daumants Liepins, winner of the Vendome award in 2019 within the Verbier festival. Those who are curious to visit his site will be greeted by a photograph realized on the stage of the Romanian Athenaeum in Bucharest, as Daumants Liepins is also a second prize laureate of the Enescu Competition in 2018, a CV aspect that he is very proud of.

Undoubtedly, 2020 was not at all as it was expected in December 2019, but Daumants Liepins brought this project to an end: his first record as an author, recorded after the outbreak of the pandemic at the concert hall from Liepaja, a harbor town at the Baltic Sea.

The record has a marine theme, related to the long walks in nature that the pianist made during the pandemic, and the walks on the seashore, accompanied by the seagulls' screams. This explains the presence on the record of Sonata no. 3 for piano entitled Seagull, composed in 2008 by Latvian composer Imants Zemzaris, born in 1951. Imants Zemzaris is the author of a piece of theatre music for Chekhov's work, The Seagull, that he worked on in 2001. The musical sketches depicting the main character have connected in this sonata in four parts which was included by Daumants Liepins on his first author's album. It is an interesting work, with an accessible contemporary language, which talks about the sea, about the immensity and the Chekhovian human nature, an opus recorded in world premiere on this disk.

Daumants Liepins is 26 years old and he is the owner of an impressive track record of important international awards. The year 2020 should have been a springboard towards an international career, just as the Pianist Magazine prefigured in December 2019, when they named Daumants one of the four pianists worth following in 2020; but the pandemic cancelled everything.

"As many other people" says Daumants Liepins, "I have spent more time in nature during the pandemic. I have thought about the mission of art in the world, I have listened to the call of the seagulls, I have felt the power of the sea as in Rachmaninoff's music. That's what my new album is all about: the majesty of nature and the frailty of the soul."

Whereas Zemzaris's sonata describes the fall into the abyss, which we have all experienced in various degrees during the pandemic, Sonata no. 2 by Rachmaninoff, the work that made Liepins remarkable in most of the international competitions he participated in, means the return to light and to life that we are all waiting for. Within Rachmaninoff's creation this work is associated precisely with this longing: he also experienced depression with the failure of his first symphony, but he recovered with the success of Concert no. 2 for piano and orchestra. In 1913, when sonata no. 2 for piano was written, Rachmaninoff was in the middle of a full creative exuberance, he was writing The Bells Choral Symphony, followed by the Choral Vespers - two notable works for his creation. Rachmaninoff revised this sonata in 1931 and this version is the one Daumants Liepins interpreted on this disk.

I have highly appreciated this album - first for the rare repertoire that has been chosen, for the concept-idea, but particularly for Daumants Liepins's delicate and extremely emotional interpretation. Indeed, it is an opportunity for reflection upon the role and influence of art in our lives, as well as a demonstration of a young pianist's creed in the healing power of music in times of pandemic. I hope that one day we will return to normality…