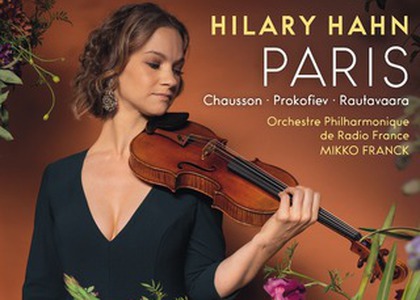 The newest CD of the most famous American violinist of the moment: Hilary Hahn and her album 'Paris' recorded alongside the Radio France Philharmonic Orchestra, led by Mikko Franck. It's a very fresh album, launched by the Deutsche Grammophon House on the 5th of March.

The recordings that you'll listen - The Chausson Poem, The No. 1 Concert by Prokofiev and two serenades by Einojuhani Rautavaara -were realized in June 2019, with few time before Hilary Hahn's announcement that in the period September 1st 2019 - September 1st 2020 she will enjoy a wild year. In the meantime, the COVID-19 pandemic imposed the prolonging of this period after September 1st 2020: without concerts or, in any case, without concerts with public; Hilary held very few online concerts. And the first major project of 2021 is the launch of this new CD - the first new CD with a concerted repertory from the last 6 years. In the 2018-2019 season, Hilary Hahn was a residential artist of the Radio France Philharmonic Orchestraand the recordings from this CD are the result of this collaboration.

The atmosphere of Paris at the end of the 19th century - glamorous and still, carrying an air of melancholy of an end of an epoch - transpires from the famous Poem for violin and orchestra by Ernest Chausson, composer born at Paris in 1855. Hilary Hahn surprises this exact dark nuance of Paris, city of lights, in her version recorded in 2019.

Paris - declared Hilary Hahn - "speaks about expressivity, about emotion, about the feeling of being connected to the city and about a cultural intersection in an inspirational way both for the interpret and listener. Paris played a main role in my career; I've played in Paris since I was a teenager".

The British magazine Gramophone declared the 'Paris' album signed by Hilary Hahn as the record of March 2021. "I doubt that Prokofiev was ever played better than he is on this CD. The fans already noted that the purchase of this CD is mandatory, the same the ones that judge in the industry of discography. And they're not wrong." -we read in the chronic present in the British publication.

Serghei Prokofiev worked on his first violin and orchestra concert between 1915 and 1917. The premiere took place only in 1923, in Paris - hereby the justification of the inclusion of this concert on the 'Paris' album, signed by the violinist Hilary Hahn and the Radio France Philharmonic Orchestra, led by Mikko Franck.

On the 17th of February 2019, Hilary Hahn and the Radio France Philharmonic Orchestra, conducterMikko Franck, were interpreting in global premieretwo serenades by Einojuhani Rautavaara, Finish composer who passed away in July 2016. These two serenades, composed in 2016 especially for Hilary Hahn, are the last works left by this Finish contemporary composer. The recording realized in February 2019 can be found now on the 'Paris' album -for that matter, it's known Hilary Hahn's interest for contemporary music, which she promoted regularly on her albums.

The Serenade for love and the Serenade for life are entitled those two meditative works of a composer who got to 87 years and could see live with objectivity, but still with emotion.

The CD in its integrality is a confession about a great violinist, with an impenetrable technique and with a deep understanding of the interpreted music; a famous violinist that doesn't make use of any firework, who you have to listen concentrated and who offers a different perspective of what the role of music means, of art in general in our lives. Not to be missed!