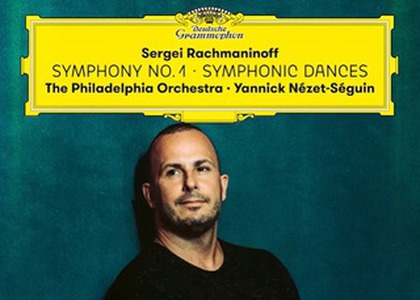 It is, in fact, the first disc in a larger series, with the full range of orchestral works by Rachmaninoff, proposed by the Philadelphia Symphony Orchestra and its principal conductor, YannickNezet Seguin - in 2022 will appear the Second Symphony and the Island of the Dead, in 2023, on the 150th anniversary of Rachmaninov's birth, the Third Symphony and the Choral Bells Symphony.

The connection between the Philadelphia Symphony Orchestra and Sergei Rachmaninoff is well known: after emigrating to the United States, this is the orchestra with which Rachmaninov presented most of the premieres of his works - Concerto no. 4 for piano and orchestra, Rhapsody on a theme by Paganini, Symphonic Dances, but also with which he made the legendary recordings of his own opposites, as a pianist. Rachmaninoff was also friends with Leopold Stokowski and Eugene Ormandy, conductors of the Philadelphia Symphony Orchestra.

So it can be said that Rachmaninov's music is in the DNA of this orchestra. And after exploring works for piano and orchestra, along with pianist DaniilTrifonov, it was time for contemporary versions of Rachmaninov's symphonic works.

"A totally amazing album" writes in the February 2021 issue of the British magazine Grammophone about this record.

Here is a score worth rediscovering: this Rachmaninov Symphony I, composed by a 22-year-old man and premiered in 1897, when Rachmaninoff was 24 years old. It was a total disaster: the orchestra had not studied enough, the conductor did not pay the required attention to the score. Rachmaninoff fell into a depression that haunted him all his life. When he emigrated to America in 1917, Rachmaninov left the score for this symphony in Russia - the orchestral notes were discovered only in 1944 and based on them the general score was reconstructed, after which it was first sung in Moscow in 1945. American performance of the work took place in 1948 - the score was performed by the Philadelphia Symphony Orchestra, conducted by Eugene Ormandy.

The first theme of Symphony I is also found in Rachmaninov's last important work, Symphonic Dances op. 45, composed in 1940 and performed for the first time in 1941, also by the Philadelphia Symphony Orchestra, conducted by Eugene Ormandy.

It is one of the scores that have benefited, over the years, from numerous recordings.

In the one you will listen to on this record, we discover both the respect for the score and the tradition of interpretation that comes from Rachmaninov himself, but also the personal, very fresh vision of YannickNezet Seguin, a great conductor of our times, at the helm of an extremely performing orchestra, capable of great expressive subtleties, and which highlights the many details of Rachmaninov's score. An important role is played by the extraordinary instrumentalists from the wind parties of this orchestra, very technical and expressive.

A painting of a legendary Russia, as Rachmaninov felt almost 30 years after leaving it, painstakingly and emotionally painted by an orchestra and a conductor who fully understand the essence of this music and also have the necessary tools to play it at a level of incredible professionalism.