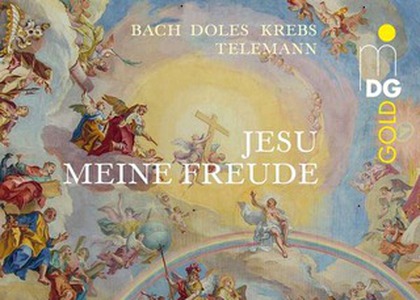 You are invited to listen to an album in the preview of its international release, planned for the 23rd of April, 2021: the album Jesu, meine Freude, with recordings realized by the BachWerkVokal Ensemble from Salzburg, conductor Gordon Safari.

It is the first time that we have the opportunity to listen on Radio Romania Musical to this ensemble dedicated to old music, founded in 2015 and which imposed itself rapidly in the German-speaking European space as one of the most important in the Baroque music repertoire. BachWerkVokal conducts its own season at the Christuskirche in Salzburg. On this album: works by Johann Sebastian Bach (motet BWV 227), Georg Philipp Telemann (catalogue cantata 966), Johann Friedrich Doles and Johann Ludwig Krebs.

The ensemble has one peculiarity: the voices of the choir also perform the solo scores - in fact, besides the instrumentalists, the ensemble is composed of 8 exceptional singers who know in detail the style of interpretation of Baroque music, which offers an obvious quality note to the recordings you will listen to further on.

The disk edited by the German label Musikproduction Dabringhaus und Grimm (MDG) consists of four cantatas and motets written on the same liturgical text - the Jesu, meine Freude Hymn, one of the most prominent in the Lutheran liturgical space, first published in a collection of Protestant hymns in 1653. In 1714, Georg Philipp Telemann wrote the Jesu, meine Freude cantata, with the catalogue number 966, for the 20th Sunday after the Ascension, a work recorded for the first time on this disk. One can recognize influences from the French Baroque music in terms of the construction, but also of the allure of the solo arias - the cantata surprises us with a brief choral in the beginning, followed by an impressive aria for bass.

Also on world premiere, like Telemann's cantata, the motet Jesu, meine Freude by Johann Friedrich Doles, a composer who lived between 1715 and 1797 is also recorded on this disk. Doles studied with Johann Sebastian Bach and was, in turn, a cantor at the Thomaskirche in Leipzig, starting from 1755. His polyphonic style is modelled on the Bachian approach, to which he adds the elegant method of constructing the song, taken from Graun and Hasse. The motet Jesu, meine Freude is an example of the late German Baroque style which heralds the new noble style from the dawn of classicism.

Of the same generation as Johann Friedrich Doles is the last composer proposed on his disk, Johann Ludwig Krebs who lived between 1713 and 1780. He was also instructed by Johann Sebastian Bach in the art of counterpoint and was recognized at the time as the most important disciple of the great Bach. Of course, Bach's influence can be recognized in the discourse of the counterpoint during the audition of the Jesu, meine Freude cantata, but even more the noble style specific to the 18th century and the echoes from the Italian music in the accompaniment of the arias. A delight!

A delight, especially in the interpretation proposed by this wonderful ensemble, BachWerkVokal, founded in 2015 by a young organist and conductor, Gordon Safari. His most important project remains BachWerkVokal, a globally top-level ensemble regarding the music generally called old. Gordon Safari taught in Hanovra and is currently a professor at the Mozarteum in Salzburg, a city where he also founded the Kammeroper Salzburg Ensemble last year, dedicated to modern opera.

I kindly recommend this album: I believe that performing old music is one of the greatest challenges which, in fact, not many people manage to overcome at an artistic level that resonates with today's public. A special vocal and instrumental technique, sensitivity, a vision that respects the original, but is also eloquent for the contemporary public: these are the ingredients of a memorable performance, ingredients also found on this disk, so relevant to be listened to in the period before Easter. Congratulations to BachWerkVokal and conductor Gordon Safari!