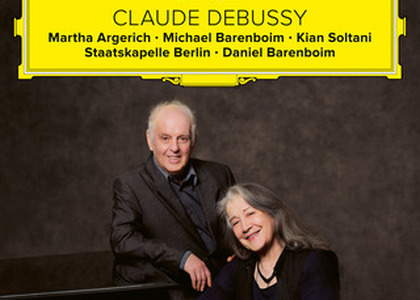 A record released by Deutsche Grammophon on June 4th, 2021: works by Claude Debussy recorded by Martha Argerich, Daniel Barenboim and the Berlin State Chapel. It is another outgrowth of the collaboration between these two sacred monsters - Martha Argerich and Daniel Barenboim, who sang together for the first time on stage in 1949. And a gift for Martha Argerich, who turned 80 on June 5 - next year, and Barenboim will be celebrated at the same age.

For the first time in her career, Martha Argerich recorded in 2018 the Fantasy for piano and orchestra by Claude Debussy. The recording was made at the Musikverein in Vienna by the Austrian Broadcasting ORF, in the company of the Berlin State Chapel, led by Daniel Barenboim - it is the same recording now available on the disc released on June 4th, 2021.

Here is a less often performed work by the famous Claude Debussy - created between 1889 and 1890, but played for the first time only after the composer's death in 1919. The impetuous Martha Argerich proposes a version full of nerve and poetry of this score in which we recognize a rather romantic world, but also with the germs of the language expression of the first great impressionist in the history of music. A delight!

The recordings with orchestral works on this record are made 3 years ago, on May 7th, 2018, when the Berlin orchestra held a live concert at the Musikverein in Vienna. 2018 marks the 100th Anniversary of Claude Debussy's death; Barenboim and Martha Argerich proposed in the 2017-2018 season at Musikverein three events dedicated to Debussy, and this was one of them. In it, the Three Symphonic Sketches were also performed;"The Sea" - it is one of the most beautiful contemporary versions I've heard lately. With impeccable timbre highlights, the speech of the conductor Daniel Barenboim seems to take you far away, on the waves of the sea, moving and exciting the audience. A great musician, a great conductor - Daniel Barenboim, director for life of the State Chapel in Berlin.

On the same disc, we can find two recordings with sonatas by Claude Debussy. There are recordings from a live recital held on June 3rd, 2018 at the Pierre Boulez Hall in Berlin, a recital in which Daniel Barenboim performed as pianist with other several musicians, some of them professors at the Barenboim Said Academy founded by Barenboim in Berlin. Among them: the violinist Michael Barenboim, the son of Daniel Barenboim, the dean of the Barenboim Said Academy, violin teacher and head of the chamber music department. A valuable violinist, whom we had the opportunity to listen to in Bucharest, several times, especially during the Enescu festival, who performed with his father the Sonata in G minor for violin and piano by Claude Debussy.

During the same recital in June 2018, Daniel Barenboim presented the Sonata for cello and piano by Claude Debussy with the Austro-Persian cellist Kian Soltani, a very talented young cellist who owes Barenboim theinternational propulsion. A volcanic interpretation of this late sonata by Debussy- a small jewel - by Daniel Barenboim.