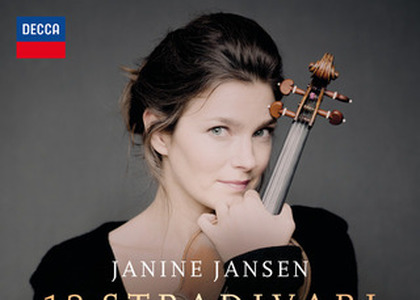 The latest album written by Duch violinist Janine Jansen was released on September 10th under the emblem of the Decca house and it is already noticed by the international press. 12 Stradivari - 12 Stradivariusviolins-is the title of this unique album recorded in December 2020 in London by Janine Jansen, in the company of Antonio Pappano, who was known as a conductor, but who we also discover as a formidable pianist.

In fact, the album 12 Stradivari is a unique opportunity to listen to how 12 different Stradivarius violins sound - rare and very precious musical instruments that belonged to famous violinists, including Kreisler, Milstein, Ida Haendel - all with a market value of over 20 million dollars each one, part of them, made available by foundations and museums for this project, musical instruments that have not been played for years and possibly nothing has ever been recorded.It was an ambitious projectand, by the way, impossible to implement, but brought to an end by the manager of one of the most important selling companies of violins in the world, J&A Beare from London, founded in 1892. Therefore, the 12 music instruments arrived in the capital of Great Britain in December 2020 and during two weeks all the recordings from the album presented today could be made.

Let's discover other Stradivarius violins: the ones that belonged to Viextemps, then the ones that belonged to the violinist's Oscar Schumsky and Ida Handel. And finally, the De Chaponay model from 1722 - in four other tracks on this album: Romance Desespoir by Henri Vieuxtemps, Lenski's Aria from Tchaikovsky's Evgheni Oneghin, in a violin and piano version by Leopold Auer, Arethusa's Fountain by Karol Szymanowski and The Havana-Shaped Piece by Maurice Ravel.

The experience of recording this album is captured in a documentary made by Gerry Fox, the winner of the Bafta awards. Yes, indeed, a unique chance in life to be able to play and record on 12 of the most precious Stradivarius violins which exist in the world - as Janine Jansen remarked.

Here are other songs from this album: Sospiri op. 70 de Edward Elgar, part III, Andante, from Sonata op. 19 de Serghei Rahmaninov, Melody from the Cycle Memories from a dear place by Ceaikovski and Bells at midnight from operetta Ball at the Opera by Richard Heuberger, the occasion to the discovery of some famous Stradivarius violins: Tyrell from 1717, then the instrument from 1716 which belonged to Nathan Milstein, Titian violin and the violin from 1717 played by Bronislav Huberman and Fritz Kreisler.

The album is not just an opportunity to explore the universe of Stradivarius violins, which can be interesting in itself. But more than that, it is the opportunity to rediscover some great musicians: Janine Jansen, among the most valuable violinists of the moment worldwide, and Antonio Pappano, much better known as a conductor, but at the same time a formidable pianist with a discography. rich in chamber music, both before, but especially during the COVID19 pandemic.

We admire the bright sound of the Stradivarius violins, each with a timbre specificity, but also the interpretive art of the two: they are very well-known pieces, to which they give a special color. There is also a creative and jovial spirit that we can easily notice and the feeling that each note is exactly where it needs to be. Two great musicians, 12 Stradivarius violins, and an album with a diverse repertoire anchored in the music of the nineteenth century - early twentieth century - a delight!


Translated by Georgiana-Carmen Rădulescu,
University of Bucharest, Faculty of Foreign Languages and Literatures, MTTLC, year I
Corrected by Silvia Petrescu
Return to Clasic