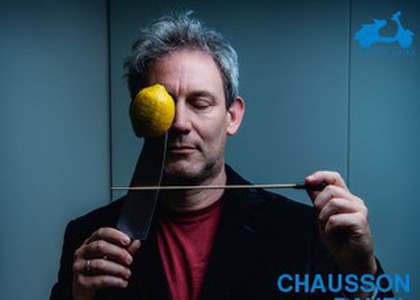 On September 16th, 2021, the audience of the Enescu Festival in Bucharest could listen to the Palace Hall or Radio Romania Musical, The Romanian Whim by George Enescu, in the interpretation of David Grimal and the ensemble he created and leads, Les Dissonances.On that occasion, the newest album signed by David Grimal was released in Romania, including George Enescu's Romanian Caprice. It is the album that you will listen to next, released at La Dolce Volta and to be released internationally on December 3rd, 2021. Of course, not the interpretation of the Romanian Caprice in Bucharest can be heard on this album, but a version of a concert that took place on October 9th, 2015, at the Auditorium of the Dijon Opera.

In the booklet of this CD, we find the thanks of David Grimal addressed to Mihai Constantinescu, the executive director of the Enescu Festival, who, more than likely, drew the attention of the French musician to this score, on which the composer worked between the years 1925-1949, but on who did not complete it. Cornel Țăranu is the one who discovered the unfinished manuscript after 1990 in the archives of the Enescu Museum in Bucharest and the one who completed the work, a first interpretive version being offered by the Romanian violinist Sherban Lupu, a refined connoisseur and promoter of Enescu's music, together with the Philharmonic Orchestra George Enescu, led by Cristian Mandeal.

Now, George Enescu's Romanian Whim has the first international record version and I am glad that its value is recognized by being nominated for the International Classical Music Awards. David Grimal really feels the essence of this music with such deep roots in Romanian folklore, he interprets in a rhapsodic style, with well-measured rubato, with well-chosen tempos; practically, it reveals to the whole world a concert for violin and large-caliber orchestra, with a special note due to its specificity in the context of 20th-century literature, a score that has all the advantages of becoming a favorite for concert programs that want to explore something else then the great established classical-romantic repertoire. And we must be grateful to David Grimal for putting this recording on the European music circuit, but also for his love for George Enescu, which can be seen in the interview in the booklet of this album, from which we learn how he chose the other two works on the album. : Gypsies by Maurice Ravel and The Poem by Ernest Chausson. Both works that George Enescu had in his violin repertoire, both, masterpieces of French literature with which Enescu had such close ties, both works in which the rhapsodic spirit is present, especially in Gypsies, a work that comes from the same source as inspiring as Enescu's Romanian Caprice: the tradition, in this case, of the gypsy fiddler, reinterpreted by the own creative filter of a great composer, such as Maurice Ravel. Chausson's Poem and Gypsy by Maurice Ravel - are recordings from April 12th, 2021, made during a concert at the Philharmonie in Paris.